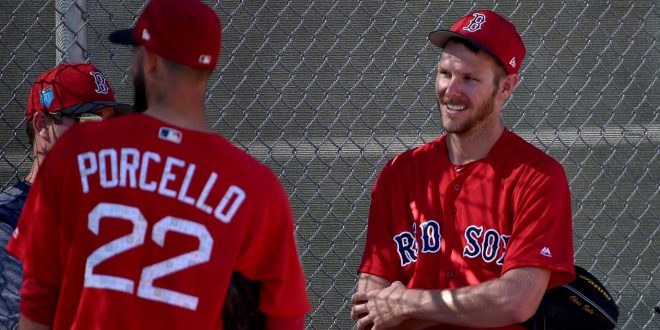 Quite the productive day for the division champs.

The Red Sox held practice on Monday in preparation for the start of spring training against Northeastern on Thursday.

Shortstop Hanley Ramirez talked with the media about his new diet, discussing that he has been implementing training methods used by Tom Brady. This means using more resistance bands as well as other methods from Brady’s book to stay in top shape after passing the age 30 mark.

Red Sox manager Alex Cora commented on Ramirez’s dietary changes, noting that he has slimmed down and seems to have increased agility. Cora also mentioned how Hall of Famer Pedro Martinez has been involved with the players and the program and how Martinez has meshed well with Red Sox pitching coach Dana LeVangie.

New Face on the Team

The 30-year-old Martinez signed with the Red Sox on Monday as reported by Pedro Gomez of ESPN.

In landing the former Arizona Diamondbacks player, the Red Sox add an important piece to the puzzle of three-peating as AL East Division Champions. Though Boston was unable to persuade Giancarlo Stanton or Manny Machado to sign with the team, Martinez is a potent player who is coming off a season in which he recorded a career high in home runs with 45.

The player with the most homers for the Sox last season was right fielder Mookie Betts with 24. In a tight battle with Aaron Judge and the New York Yankees for supremacy in the AL East, J.D. Martinez may be the player they need to push the team over the Red Sox over the top.

Previous Florida Ready For Road Test vs. No. 19 Tennessee on Wednesday
Next SEC Basketball Preview: Ole Miss At Missouri