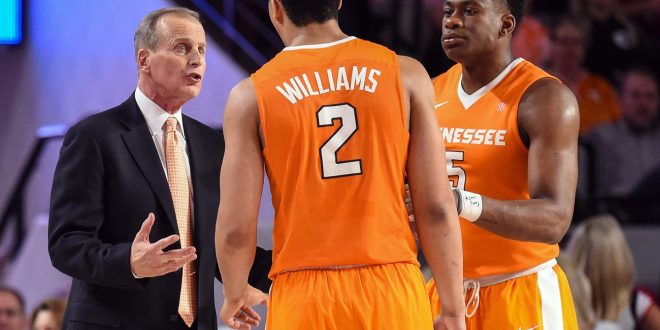 With only four games left in the regular season for the Tennessee Vols, the matchups are more important now than ever. Tonight, the Vols (19-7, 9-5 SEC) will tip off against the Florida Gators (17-10, 8-6 SEC) Wednesday night at 9 p.m. in Knoxville, Tennessee.

SEC Standings are on the line

Tonight’s game is crucial as it’s one of two left in the season against a conference rival. A win tonight could potentially seal a good SEC Tournament top-four seed for the Vols. Heading into the matchup, Tennessee is second behind Auburn in the SEC. If the Vols secure a win against the Gators and another in next Saturday’s game against the Georgia Bulldogs, they could potentially gain a double-bye in the SEC tournament.

Looking into the depth of the roster

No. 19 Tennessee will depend on the leadership of sophomore forward Grant Williams to lead them to a victory tonight. The 6-foot-7 Charlotte, North Carolina, native has played a crucial role in Tennessee’s lineup this season. So far, Williams is ranked No. 1 on the team as in four categories: scoring (15.7 points per game), average minutes (28.8 per game), completed free throws (122) and points (409 total this season).

In addition to Williams, the Vols will also depend on the tenacity of junior forward Admiral Schofield. The 6-foot-5 Zion, Illinois, native falls in the top-5 in almost every category on the stat line. However, Schofield leads the team as No. 1 in defensive rebounds (119), total rebounds (159) and steals (29). He’s second behind Williams in scoring, averaging 12.2 points per game.

From the outside looking in

Former Tennessee Vol and radio analysist Bert Bertelkamp believes Tennessee has exceeded expectations this season. Bertelkamp attributes their success to coach Rick Barnes using his bench and giving everyone a chance to compete, especially those that give 110 percent and play without turning the ball over. Bertelkamp also thinks that the additional depth on the roster this season compared to previous ones has made a difference on the court for the Vols.

If Barnes knows one thing going into the last four games of the season, it’s that every game leading up to the end has been a difficult one since the beginning. Going into Wednesday’s game against the Gators, Barnes noted on Florida’s explosiveness in game-time situations. Coming off a loss (62-73) at Georgia on Saturday in Athens, the Vols need the next two wins to have a good chance at a stable SEC tournament standing.

Mari Faiello is a second-year journalism student and sports writer for the Alligator. She covers the University of Florida's softball team and has previously covered UF men's tennis, UF women's tennis and UF volleyball. She has worked at the paper since Fall 2017. She has worked at ESPN 98.1 FM - 850 AM WRUF since Spring 2018. Her favorite sports are volleyball, college football and hockey (Tampa Bay Lightning).
@@faiello_mari
Previous Gators Prepare For NCAA Rematch Against Bethune Cookman
Next Alabama – Auburn Basketball Preview