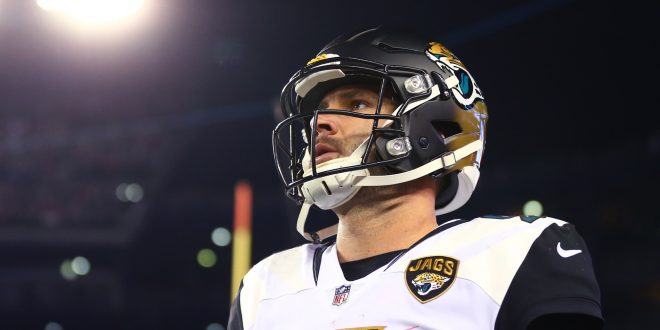 The Jacksonville Jaguars recently signed their starting quarterback, Blake Bortles, for three more years. While many fans disagreed with the decision, the front office felt that signing their franchise quarterback for the foreseeable future was a top priority.

A Year To Remember

Jaguars fans had low expectations coming into the 2017 season. Why wouldn’t they? Before the season began, the team seemed not to be able to progress even with a young, talented roster.

Finally, in 2017, the future looked bright as the team finished the regular season with a 10-6 record (their best since 2007) and won the AFC South.

Sustained by a strong running game from rookie Leonard Fournette and a top defense led by cornerback Jalen Ramsey, the team made it all the way to the AFC championship for the first time since 1999.

While they eventually lost to the New England Patriots in a tight game, many in Jacksonville were hopeful for the franchise’s future as long as they continued to improve on their weaknesses. When the front office signed Bortles to three more years, many felt that this was not fixing a weakness, but prolonging one.

With Bortles at the helm in the 2017 campaign, the Jaguars had an average passing game, ranking 17th in the league in passing yards per game and 20th in total passing touchdowns. Bortles also had his worst statistical year since he was a rookie throwing only 21 touchdowns and 13 interceptions.

However, Jaguars’ General Manager David Caldwell decided that consistency at the quarterback position was vital as he signed Bortles to a three-year $54 million contract.

Confidence In The Players

General Managers are paid the big bucks to make decisions that they know will be unpopular. Caldwell earned his paycheck this offseason as he made a decision he felt will keep the Jaguars competitive for years to come.

“It was agreed across the board,” Caldwell said. “(Bortles) is not a placeholder.”

Jacksonville players also came out in support of their quarterback. Fournette, among others, expressed their exhilaration of three more years of Bortles.

The Jacksonville quarterback has had an unpredictable career up to this point. In his second year in the league, Bortles three for 4,428 yards and 35 touchdowns, and many believed he was the future of the NFL. The next season he regressed by throwing only 23 touchdowns on 16 interceptions.

Turnovers have been an issue for Bortles since entering the league in 2014. His 13 interceptions in 2017, while still good for 14th worst in the league, were the lowest of any season in the NFL for him.

With his new contract, Bortles will need to prove that he has earned the confidence of the front office by showing he can continue to improve.