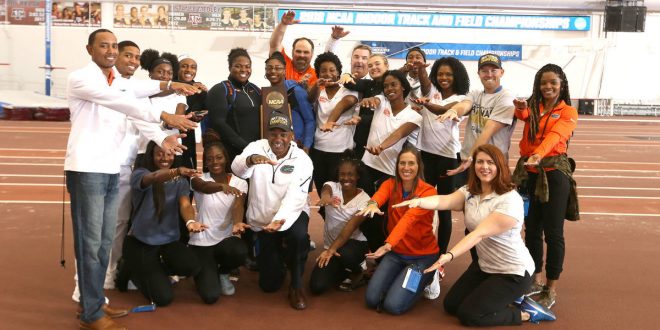 The Indoor Track and Field National Championship was held at Gilliam Stadium at College Station, Texas this past weekend where the Gators Men’s Indoor Track team have retaken their NCAA throne after finishing in first place for the first time since 2012 and fourth since 2010.

Putting the Team on Their Back

Grant Holloway and Keandre Bates had themselves a tremendous outing as they carried much of the workload for the Florida Gators. They both amounted to impressive winning results in their individual events. Holloway placed second in the long jump on Friday but overcame adversity and placed first in his best event, the 60m hurdles with a time of 7.49 seconds.

Galloway is already the collegiate record-holder for 60m hurdles with a time of 7.42. He was just shy of tying his own record. He amounted to becoming the first collegiate man to run under 7.50 seconds in the 60m hurdles at least three times in his career.

As for Bates, the reigning champion of the triple jump unfortunately finished in 2nd place. These points from second place helped the Gators out in the final event of the day with the 4×400 meter race. The Gators needed at least a fourth place finish in the race to seal their fourth title in school history.

These four titles that the Gators have won makes them the only school to win this many titles since 2010. The best part about this title victory? It’s the 40th championship title in school history among both women and men’s sports… 40 years apart from the same year the Men’s golf team won the school’s first national title.

Recent grad from the University of Florida. Editing all articles on here while helping out the newbies. Love all things basketball.
@@MarcoJMartinez_
Previous FEATURE: Dr. Jen Welter, the First Woman Coach in the NFL
Next Newest Addition to the Rays’ Dugout (Spoiler: It’s Not a Player!)