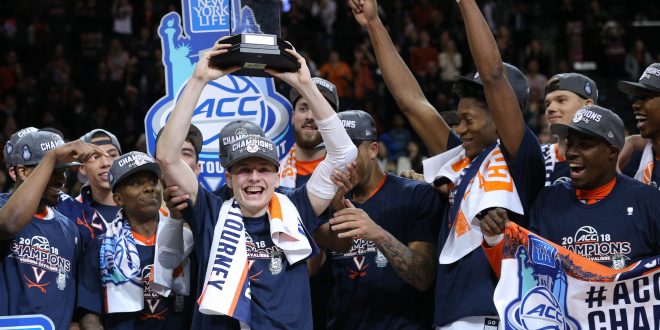 Virginia, Villanova, Kansas, and Xavier Prepare for Life at the Top of the Bracket

The official bracket was revealed for the 2018 NCAA Tournament on Sunday, with the four No.1 seeds belonging to the Virginia Cavaliers, Villanova Wildcats, Kansas Jayhawks, and Xavier Musketeers. Virginia is the top seed in the South Region, Villanova is in the East, Kansas is on top of the Midwest, and Xavier leads the West. 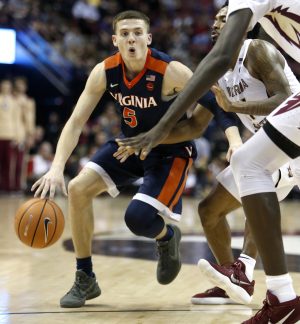 The Virginia Cavaliers have been the most consistent team in the country over the course of the season, posting a 31-2 overall record and sweeping both the ACC regular season and tournament championships. The Cavaliers have been the No. 1 team in the country in the AP Top 25 poll since February 12th, rising steadily from unranked preseason status to a top-5 ranking by January 8th. The Cavaliers earned the No. 1 seed over all 68 teams in the NCAA Tournament.

The Cavaliers are led by sophomore point guard Kyle Guy, who leads the Cavaliers in scoring and points per game (PPG) with 14.1. Guy scored at least 15 points in every game of the Cavaliers ACC Tournament run, and made 9 three-point attempts in that 3-game stretch. The Cavaliers also boast the best scoring defense in the nation, holding their opponents to an average of 53.4 PPG. The Cavaliers haven’t allowed a single opponent to score over 70 points on them this season.

The Villanova Wildcats have a No. 1 seed for the second year in a row behind their 30-4 record and Big East Tournament Championship. The Wildcats boast the highest scoring offense in the country at 87.1 PPG and also lead the nation in offensive efficiency. The Wildcats have six players that average over 10 PPG, including the duo of junior guards Jalen Brunson and Mikal Bridges. Brunson averages 19.4 PPG and Bridges averages 18 PPG. Simply put, the Wildcats are an offensive juggernaut.

A Tradition at the Top

The Kansas Jayhawks have been here before. In fact, of the 15 Kansas teams that head coach Bill Self has overseen, none have been seeded lower than a No. 4 seed and 8 have received a No. 1 seed. This year’s Jayhawk team swept the regular season Big 12 conference championship (their 14th consecutive one at that) and the Big 12 Tournament Championship. They head into the Tournament with a 27-7 record and the third overall seed in the Tournament.

Senior guard Devonte’ Graham averages 17.3 PPG and leads the nation in assists per game with 7.5. Sophomore center Udoka Azubuike also leads the country in field goal percentage at 77.4%. With a host of playmakers and experienced head coach, Kansas could be expected to make a deep tournament run. The Jayhawks have failed to make it to the Final Four since 2012, however, despite holding either No. 1 or No. 2 seeds during those times.

The 28-5 Xavier Musketeers received their first No. 1 seed in program history on Selection Sunday. They gained a top seed despite a loss in the Big East Tournament Semifinals to Providence and being swept by fellow No. 1 seed Villanova.

The Musketeers are led by senior guard Trevon Bluiett, who has a penchant for showing up in big games, including a 26-point outing against Villanova, a 37-point explosion against Seton Hall, and a 28-point showing in a win over Cincinatti. Despite their first ever No. 1 seed, the Musketeers do not have a favorable road to the final four. No. 2 seed North Carolina is an experienced foe, No. 3 seed Michigan is quite possibly the hottest team in the country, and No. 4 Gonzaga was the National Runner-Up last year.

The Road to the Final Four

The Kansas Jayhawks open the tournament against Penn in Wichita, Kansas on Thursday at 2:00 P.M. They will play the winner of No. 8 Seton Hall vs. No. 9 NC State if they advance.

The Villanova Wildcats have their first game against either LIU Brooklyn or Radford in Pittsburgh, Pennsylvania on Thursday evening at 6:50 P.M. They will go against the winner of No. 8 Virginia Tech vs. No. 9 Alabama if they advance.

The Xavier Musketeers will play against either North Carolina Central or Texas Southern in Nashville, Tennessee on March 16th at 7:20 P.M. If they win and advance, they will play the winner of No. 8 Missouri vs. No. 9 Florida State.

Virginia faces UMBC in Charlotte, North Carolina on March 16th at approximately 9:20 P.M. They will face the winner of No. 8 Creighton vs. No. 9 Kansas State, if they advance.