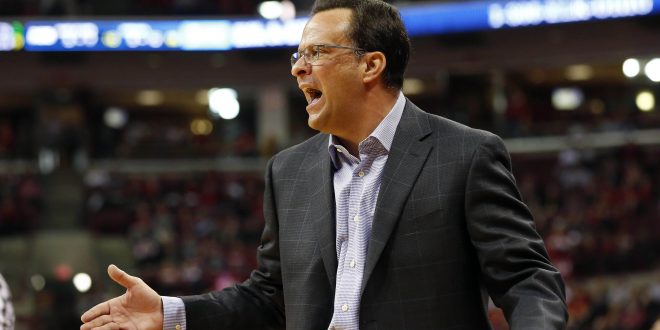 Georgia men’s basketball has found its next head coach. Former Marquette and Indiana head coach Tom Crean will take over a Georgia program that has fallen on some tough times. He will try to bring Georgia to be a force to be reckon with both in the SEC but on a national scale.

Tom Crean was introduced as the new Bulldogs head coach at a press conference Friday afternoon. He presented his plan for changing the culture of the program both on and off the court. On the court, he plans on implementing a three-point assault on offense.

“We’re going to shoot the three,” Crean said. “Our big men need to be able to shoot threes and handle the ball.”

Off the court, Crean laid out the three things he wants observers of the program to see from his Georgia men’s basketball team.

“Number one, there’s going to be an energy,” Crean said. “Number two, we’re going to have that player development mindset. And the last thing is, there’s no doubt we’ve got to recruit.”

Crean comes to Athens with a resume that’s loaded with postseason success. He first became a head coach in 1999 when he took over Marquette. With the Golden Eagles, Crean and his team made the tournament five of his nine seasons. Crean led a Marquette team, which included future NBA legend Dwyane Wade, to a Final Four appearance in 2003 where the team fell in the national semifinal round to Kansas.

After Marquette, Crean was hired as head coach of Indiana in 2008. The expectation was for Crean to return the Hoosiers to the forefront of the college basketball landscape. He failed to lead the Hooisers to postseason play his first three season in Bloomington. In his fourth season, his Hooisers boasted 29-7 record and winning the Big 10 regular season championship. They would fall in the Sweet Sixteen of the Tournament to North Carolina. They would return to the Sweet Sixteen again two years later with a similar exit from the tournament. A NIT birth last season proved to be the end of his roller coaster tenure as Indiana head coach.

He was fired as Indiana’s head coach and spent this season as an analyst for ESPN.

Even though Crean experienced some trouble in Indiana, Georgia athletic director Greg McGarity said his new head men’s basketball coach is “one of the most successful coaches in college basketball over the past two decades.”

Next season, Crean will try to return the Bulldogs to postseason play. They haven’t made a tournament appearance since 2015, losing in the first round to Michigan State. Georgia was invited to participate in this year’s NIT but declined due to the coaching change.