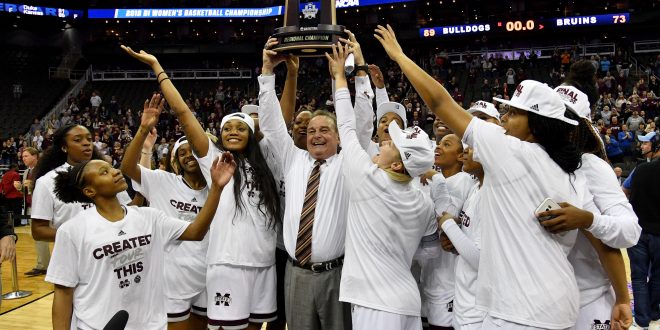 Bulldogs Headed Back to Final Four in Search of Redemption

The Mississippi State Bulldogs women’s basketball team is going to the Final Four for the second consecutive year. The No. 1 seed Bulldogs (36-1) defeated the No. 3 seed UCLA Bruins (27-8), 89-73, Sunday night at the Sprint Center in Kansas City.

Head coach Vic Schaefer’s Bulldogs take on fellow No. 1 seed Louisville in a semifinal Friday in Columbus, Ohio. The other semifinal hasn’t been finalized, but the Connecticut Huskies and Notre Dame Fighting Irish are heavy favorites to win their Elite Eight match-ups Monday night. The National Championship Game will be played Sunday evening.

Mississippi State won its game against the Bruins by simply making more shots. While the Bulldogs had a plus-six advantage on the boards, the Bruins negated the advantage by winning the offensive rebounding margin 15-11. The Bruins won the turnover battle, 11-10. UCLA also held advantages in points in the paint, second chance points, fast break points and bench points. Still, the Bulldogs won in dominating fashion, leading for all but one minute and 39 seconds. Why? The Bulldogs shot 50 percent from the field and held the Bruins to 37.3 percent. From the arc, the Bulldogs were 8-13, while the Bruins were 6-19.

Mississippi State came out of the gates fast, building a 17-8 lead with 3:35 to go in the first quarter. The Bruins, however, made their last four shots of the quarter to remain within striking distance at 23-17.

The Bulldogs blew the game open in the second quarter, outscoring the Bruins 19-9. The Bruins shot just 16.7 percent in the quarter and scored more points from the free throw line (5) than from the field (4). Vivians outscored the entire UCLA team in the period with 11 points. When redshirt senior guard Roshunda Johnson knocked down a pair of free throws with 26 seconds remaining in the half, the Bulldogs had their largest lead of the game at 42-24. Bruins’ freshman forward Michaela Onyenwere made a jumpshot just before time expired to send the teams to the locker rooms with the Bulldogs leading 42-26.

Mississippi State picked up where it left off to begin the third quarter. The Bulldogs led 50-32 before the Bruins went on a 12-3 run to cut the lead to single digits. Junior guard Kennedy Burke scored eight of the Bruins’ points during this run. UCLA made three of six three point attempts and outscored Mississippi State 24-21 in the quarter.

In the fourth quarter, Canada scored seven consecutive points for the Bruins to cut the lead to 69-63 with 6:19 to play. After the Bulldogs edged the lead back out to nine, Dean buried a three to make the score 74-68 with 2:55 remaining. However, MSU finished the game on a 15-5 run, with nine of those points coming at the stripe, to finalize the 89-73 margin.

The Bulldogs aren’t just satisfied with making the Final Four. They have unfinished business. A year ago, the Bulldogs pulled off one of the greatest upsets in women’s basketball history when they slayed unbeaten and four-time defending champion Connecticut in the national semifinals. Then-junior guard Morgan William’s game-winning buzzer beater is forever immortalized in the tournament’s lore. Just two nights later, however, unbridled joy turned to disbelief and heartbreak as the Bulldogs fell to SEC rival South Carolina in the National Championship Game.

They have earned their opportunity for redemption. Should the Bulldogs prevail against the Fighting Irish, they could face either Connecticut or South Carolina in the championship game. The storyline is there. One question remains: can the Bulldogs complete the storybook ending?