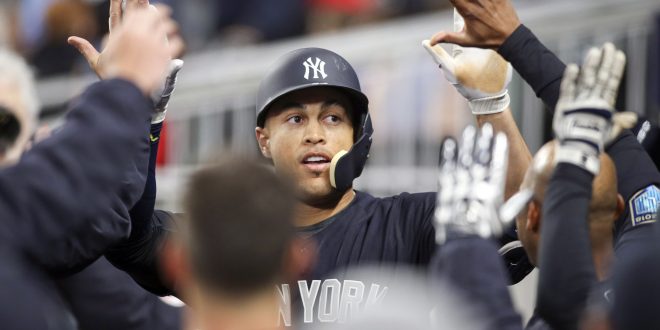 The 2018 MLB regular season kicks off Thursday March 29th with a number of exciting matchups. Among those is the Toronto Blue Jays’ home opener against the New York Yankees at 3:37 p.m. The game will be the first in a four game series to start the season for the American League teams.

The Toronto sign will be lit in blue today for the @BlueJays Season Opener. The boys of summer are back! #BlueJays #OpeningDay #MLB pic.twitter.com/CUwNWXoFEm

Names to look out for this series

J.A. Happ will take the mound for the Blue Jays to start off the game. The 6’5″ veteran lefty boasts a career ERA of 3.93 over 11 seasons in the majors.

Starting on the mound for New York will be fan favorite, Luis Severino. Over three impressive seasons with the Yankees, Severino pitched a career 3.58 ERA, including last season’s 2.98. This year, he is expected to continue to bring down his ERA. Behind him, this season’s spotlight outfielders Aaron Judge and Giancarlo Stanton look to contribute to Yankee dominance on the offensive side of the ball. In 2017 Judge produced a .422 OBP with a .284 BA in 542 at-bats.

Last season, Judge was unanimously named American League Rookie of the Year. This year, MLB fans have high hopes for his third season in the major leagues. New to New York, the former Miami Marlins star Stanton generated a lot of hype for 2018 in New York as well. Thursday, he bats second for New York.

Before 2018, Stanton played every season for the fish since his age-20 rookie season in 2010. Frustrated with the Marlins Organization and tired of seasons under .500, Stanton left Miami to start slugging in New York in hopes for better results. Stanton is batting in the third spot in the Yankees’ lineup.

Gary Sanchez will be catching in the season opener and batting fourth for cleanup in the Yankees’ lineup.

Fans expect a lot from manager Aaron Boone and his powerful lineup in New York for the 2018 season. The Yankees made it deep into the playoffs in 2017 before the 2017 Champion Astros stunted them 4-3 in the ALCS. Thursday at 3:37, the slugging trio will set the tone for the rest of the 2018 season as the Yankees try to make it all the way.

The Blue Jays finished fourth in the American League East in 2017 and haven’t seen the playoffs since 2016’s wild card victory over the Orioles. In Thursday’s game, Toronto looks to start a more successful 2018.

I grew up in the Washington, DC area and now I'm a Gator. I'll always be learning more about myself, others and the world around me. And I'll always be talking about sports.
@kelsey_godman
Previous Chiefs Looks to Mahomes Era
Next San Francisco 49ers Continue To Improve