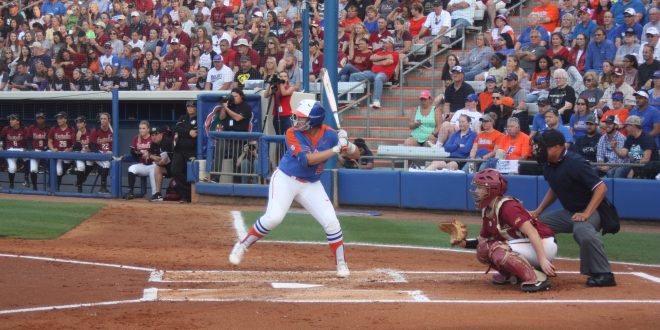 The fourth ranked Gator softball team split a doubleheader with Florida International University on Wednesday at home, winning 9-0 in five innings in the first game but losing 5-0 in the second game.  The Gators fell to 16-1 at home this season, ending a perfect run at Katie Seashole Pressly Stadium. The SEC champions sit at 28-4 overall this season, with a 21-2 record against non-conference opponents this season.

Aleshia Ocasio returned to the circle and delivered her first complete-game no-hitter of the season. Only throwing 55 pitches, the St. Cloud native struck out six batters and walked only one.  Ocasio improved to 12-2 this season, with her last no-hitter against Jacksonville Feb. 17, 2016, in a Gators 6-0 win.

Ocasio gave credit to the offensive production of the Gators in helping her feel good on the mound.

“I felt like I got better throughout the game, but our offense worked hard and put up nine runs on the board. That gives you a lot of confidence on the mound, knowing that you have that wiggle room. I felt really good on the mound today.”

Florida scored one run in the first inning and third inning before a massive seven-run inning in the bottom of the fourth. Nicole DeWitt, Jordan Matthews and Ocasio all finished with two RBIs in the game. Amanda Lorenz, who had multiple walks in the game, also hit an RBI double.

On the other hand, Tim Walton’s team struggled on offense and defense in the second game of the day.  The Gators finished with three hits and two errors in a game where the players looked like they lacked energy and composure. Florida pitcher Katie Chronister was given the start in the circle and she allowed three runs to the Golden Panthers in the first inning. The first error allowed the first run to score before first baseman Kasandra Castle’s two-run home run extended the Golden Panthers lead to three.

Freshmen Natalie Lugo replaced Chronister in the bottom of the second. However, Lugo gave up a single allowing center fielder Jackie Schoff to take advantage with a two RBI double. Lugo would only give up four hits in the last five innings. On the positive side for Florida, Amanda Lorenz kept her streak of reaching base in every game this year intact with a double and a walk.

Florida returns to the field this weekend with a pair of games against Hampton and Jacksonville. The first game starts at 4 p.m. on Friday.