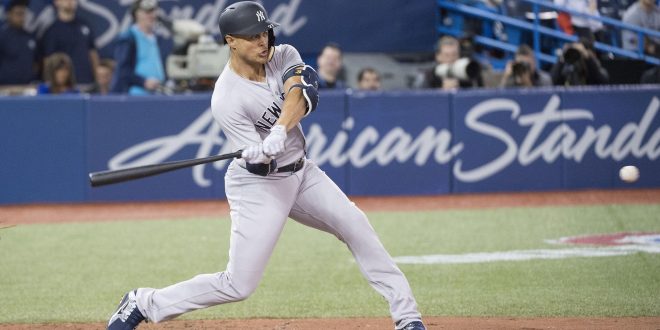 Giancarlo Stanton Homers Twice on Opening Day With The Yankees

After acquiring Giancarlo Stanton just a few months back, the pressure was on as fans expected much of him on Opening Day. Being the elite player he is, Stanton didn’t just prove to the fans he’s capable of wearing a Yankee jersey, but to the nation as a whole.

Not wanting to be another name under one of the New York tabloids as “Not a true Yankee”, Giancarlo Stanton quickly earned the title “true Yankee” after homering in his first at-bat with his new team.

Stanton sent a 426-foot homer off J.A. Happ to join the fans in the stands. Stanton’s home run brought in Brett Gardner allowing the Yankees to have a 2-0 lead in the top of the 1st. Stanton was pleased with the first homer and emphasizes how much he’s trying to prove he belongs with this team.

Action in the game didn’t pick back up until top of the 5th when Stanton sent a double down center field allowing Aaron Judge to run home. Gary Sanchez then hit a double to deep center and Stanton was able to score now leaving the Yankees with a 4-o lead.

In the top of the ninth, Giancarlo Stanton continued to put on for his team as he blasted yet another homer, this one reaching the upper deck of the stadium traveling 434 feet.

After leaving Miami, there’s every reason for the expectations for Giancarlo Stanton being so high. With the Marlins, Stanton finished last season with a career high of 59 homers and a 132 RBI. His performance down south allowed him to win the National League MVP Award and is the first player in Marlins history to achieve the NL’s highest honor.

It’s hard not to get overwhelmed by an outstanding Opening Day presentation, but Stanton looks pretty promising. Giancarlo Stanton is the first Yankee since 1961 to hit multiple homers in their New York debut. There’s no telling exactly how many home runs will be expected from Stanton, but what we do know is that there will be plenty.