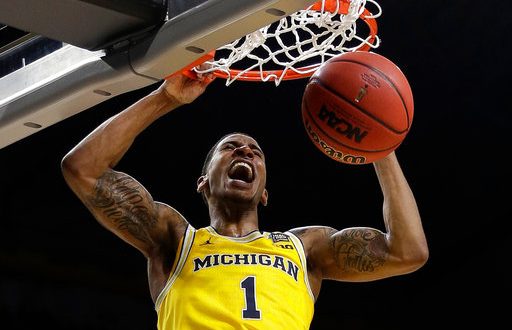 Michigan's Charles Matthews (1) dunks during the second half in the semifinals of the Final Four NCAA college basketball tournament against Loyola-Chicago, Saturday, March 31, 2018, in San Antonio. (AP Photo/David J. Phillip)

Michigan Ready to Take On Villanova

With the NCAA national championship game nearly here, the Michigan Wolverines are ready to take on the Villanova Wildcats.

Michigan’s Road to the Title Game

The Michigan Wolverines have had an unusual string of opponents on their way to the national championship game. They have faced a 14-seed, a 6-seed, a 7-seed, a 9-seed and an 11-seed on their way to a match-up with the Wildcats. While these are lower seeds, the quality of opponents Michigan has faced cannot be overlooked. In the first round, the Wolverines ran through Montana by a score of 61-47. The second round presented a challenge for Michigan as they need a game-winning three at the buzzer to take down the 6-seeded Houston Cougars. In the Sweet Sixteen, Michigan’s offense exploded for 99 points in a 27-point blowout over Texas A&M. The Elite Eight saw Michigan pull out a 4-point victory against Florida State. In the Final Four, Michigan rallied from a 10-point deficit against the Loyola Chicago Ramblers behind Mo Wagner’s 24 points and 15 rebounds.

Freshman Jordan Poole said that the Wolverines are a team who “feed off momentum.”

Doing It With Defense

Michigan has come this far in the tournament as a result of their defense. The Wolverine defense has been smothering opponents and taking away easy shots. They are holding their tournament opponents to just 40% shooting on two-pointers and have allowed just 18 total made threes in five tournament games so far. They are shutting down opponents with their quick rotations and great individual defense. Michigan’s opponents are scoring only 58.6 points per game against the Wolverines in the tournament.

"It's incredible. I'm really, really enjoying this ride… we have one more to go." – Moritz Wagner (24 PTS, 14 REB) on @umichbball advancing to the #NationalChampionship#GoBlue pic.twitter.com/aSIpLGUemk

The Wildcats are the best team that Michigan will face in this tournament. They have an explosive offense and are on fire heading in to the championship game. Villanova is averaging almost 85 points a game in their five tournament games so far. In their win against Kansas, the Wildcats hit a Final Four record 18 three-pointers, with 13 of those coming in the first half. They have hit 66 three-pointers in the tournament and a record 454 threes on the season. This will certainly be a match-up of an elite offense against an elite defense.

Michigan’s Mo Wagner said that Villanova presents a “tremendous challenge” and that the national championship game “isn’t supposed to be easy.”

Michigan will try to win their second ever national championship in men’s basketball when they take on the challenge of beating Villanova tonight.

The Back Nine comes at you after a visit to St. Augustine to see Dad, …