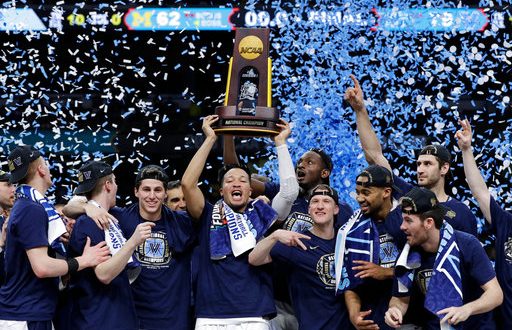 College basketball has another champion to celebrate. Villanova won its second national championship in three years on Monday night after defeating Michigan 79-62.

VILLANOVA HAS DONE IT!

Villanova started off slowly.  Michigan took the lead two minutes into the game and maintained that lead until there were six minutes left in the first half. From then on out, it was Villanova all the way. Nova led by nine entering the second half (37-28.)

However, an unlikely hero led the Wildcats to victory. Villanova’s Donta DiVincenzo was raining three’s adding 31 points to Nova’s scoreboard; he also finished with five rebounds and three assists.

In addition, DiVincenzo scored nine straight for Villanova midway through the second half finishing 5 for 7 from downtown.

Nova’s head coach Jay Wright says DiVincenzo’s focus was the reason for his success during the National Championship game.

Right behind DiVincenzo was Mikal Bridges with 19 points, four rebounds and one assist. Meanwhile, Jalen Brunson, the national Player of the Year, finished with nine points for the Wildcats.

Coach Wright says he doesn’t look at their win as a domination over Michigan, but as a successful college basketball run that got stronger throughout the tournament.

And Michigan’s Moritz Wagner finished with 16 points, seven rebounds, and one assist.

However, the Wolverine’s defense couldn’t keep up with the Wildcat’s strong offense. Michigan made 3 of 23 three-point attempts, while Nova was successful 10 out of 27 tries.

All in all, Villanova is the fourth team to win all of its NCAA tournament games by double digits. The Wildcats lost only four times all season and never by more than eight points, according to ESPN.