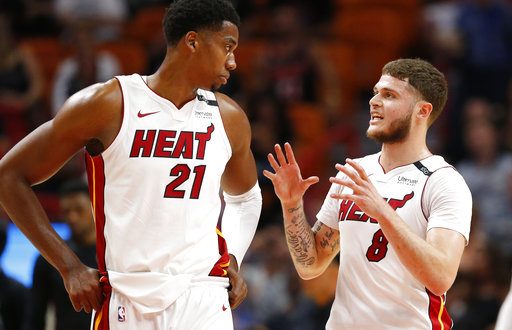 Miami Heat center Hassan Whiteside (21) and guard Tyler Johnson (8) talk during the first half of an NBA basketball game against the Atlanta Hawks, Tuesday, April 3, 2018, in Miami. (AP Photo/Wilfredo Lee)

The Miami Heat clinched a playoff berth with a 101-98 win at home over the Atlanta Hawks. Goran Dragic led the Heat with 22 points, 10 rebounds, 3 assists and 3 steals while shooting 9-14 from the field and 3-4 from beyond the arc. Hassan Whiteside added 18 points, 12 rebounds and 3 blocks.

MIA moves into 6th place in the East.

Eight different players scored eight or more points for Miami on the evening. John Collins paced the Hawks with 19 points and 10 rebounds in 33 minutes of action. Tyler Dorsey added 18 points off the bench for Atlanta.

The Heat were down 98-90 with 3:07 left in regulation. They ended a game on an 11-0 run. James Johnson converted two lay-ups to cut the lead to four and Tyler Johnson made a 3-pointer with 1:29 left to make it a one-point game. Hassan Whiteside’s tip-in gave Miami the lead with a minute remaining, and they never looked back. Josh Richardson blocked a potential game-tying three-point attempt by John Collins in the final moments to secure the victory.

Erik Spoelstra’s squad struggled on the night, but were able to keep themselves within striking distance throughout the contest. They shot 45.1% from the field and an abysmal 8-33 (24.2%) from beyond the arc. The Hawks out-rebounded their opponent 49-46 and were missing starting center Dewayne Dedmon with a rib injury.

The Heat have now won three of their past four games. They are in the midst of a seeding battle with the Washington Wizards and Milwaukee Bucks. All three teams are 42-36 with only 4 games left in the regular season. Whoever finishes as the 8th seed will likely play the Toronto Raptors in the first round, while whoever finishes 7th will likely head to Boston for a first round series with the Celtics.

Dwyane Wade discussed the challenging road ahead for the Heat.

“We know, as it looks right now, it’s going to be either Toronto, Boston or Cleveland,” Wade said. “And they are all very, very good teams. So it doesn’t matter who we match up with. We’re going to have our work cut out for us. But obviously, other matchups have more story lines than other ones.”

The Miami Heat will once again take on the Atlanta Hawks on Wednesday night at 7:30 p.m.

Hustled our way to a seat at the #WhiteHot table.