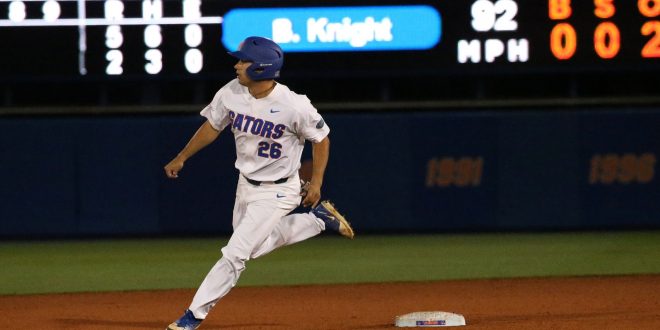 The number one ranked Florida baseball team (26-5, 7-2) defeated the FGCU Eagles (22-6) Tuesday night by a score of 8-4 in Gainesville. The victory pushes Florida’s current winning streak to seven which matches their season-high. The win also improves the Gator record against in-state opponents this season to 10-3 and 124-54 under head coach Kevin O’Sullivan.

FGCU entered Tuesday’s game averaging just over eight runs per game. Gator freshman starting pitcher Tommy Mace surrendered seven hits over four innings, but managed to limit the Eagles to only two runs, one of which was earned. He also struck out four.

O’Sullivan said Mace’s start was a good one, especially considering it was against a club that’s top-10 nationally in hitting.

Andrew Baker took over for Mace in the fifth and put forth an impressive effort. He pitched three scoreless innings, allowing one hit and one walk. The outing, in which he also struck out three, matches his season-long. Baker’s ERA now drops from 3.27 to 2.57 on the season.

Hunter McMullen entered in the eighth but managed to get only one out. He gave up two runs on four hits before turning to ball over to O’Sullivan. Michael Byrne then came on and retired the final five Eagles hitters.

O’Sullivan commented on Baker and Byrne’s performances following the game.

Play of the Game

Nick Horvath’s defensive prowess was on full display in the top of the sixth. FGCU second baseman Eric Gonzalez blasted an Andrew Baker off-speed pitch to left center and it looked as if the ball was destined to put the Eagles ahead, but Horvath climbed the wall and brought back the would-be two-run home run to preserve a 3-2 Gators lead.

MUST WATCH video of #LittleNicky robbing a two-run shot to preserve the lead!

The Gators scored their first run in the first on a JJ Schwarz sacrifice fly, his 27th RBI of the year. Deacon Liput picked up the second run in the second inning on an RBI double that scored Brady Smith. However, it wasn’t until the bottom of the sixth inning that the Florida offense really hit its stride.

After making his highlight reel catch in the top of the frame, Horvath capped a five-run sixth inning with a three-run home run to put Florida up 8-2. Earlier in the frame, Austin Langworthy scored on a RBI single off the bat of freshman Brady Smith. In the following at-bat, Deacon Liput reached on an error and picked up his 15th RBI of the season when Blake Reese scored.

After the game, O’Sullivan touched on Horvath and the rest of the lineup’s productive night.

Jonathan India extended his hitting streak to 16 games with a double in the third inning.

This weekend the Gators will travel to Knoxville to take on the Tennessee Volunteers (18-12, 4-5) for a three-game series. Under O’Sullivan the Gators are 20-10 against the Volunteers, including a 9-6 record on the road.

I'm an above-average golfer with surprisingly great touch around the greens. Click on my twitter link for some sports talk.
@Ry_McGinn
Previous Tiger Woods Returns to Augusta
Next Heat Clinch Playoff Berth With Victory Over Hawks