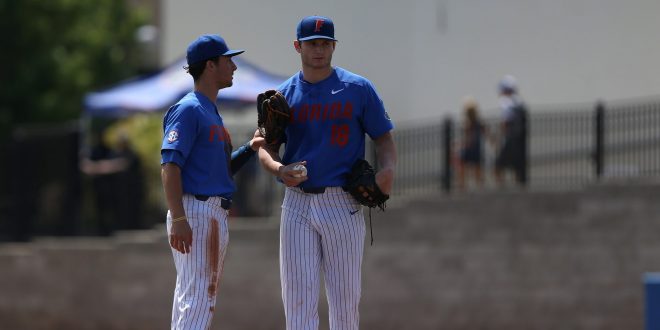 Tyler Dyson and Jonathan India during the Gators' game against the Arkansas Razorbacks on Sunday, March 25, 2018 at McKethan Stadium in Gainesville, FL / UAA Communications photo by Kelsi Bevington

Preview: No. 1 Florida Baseball Hits the Road to Face Tennessee

The No. 1 Florida baseball team (26-5, 7-2) will be in Knoxville this weekend for a three-game set against the Tennessee Volunteers (18-12, 4-5). In 2017, Florida dropped two of three games against Tennessee with both losses coming in extra innings. However, under head coach Kevin O’Sullivan the Gators do have a winning record of 20-10 against the Vols.

Tennessee is led by head coach Tony Vitello who is in his first year with the team. Their SEC record of 4-5 isn’t eye-popping by any means, but it’s an improvement over last year when they started 1-8 in SEC play.

Leading the way offensively for the Volunteers is sophomore Andre Lipcius. He has a team-high 25 RBI. Fellow sophomore Jay Charleston is also a major contributor. He’s hitting .302, 5-for-12 in his last three games, and he’s 10-for-10 on stolen bases.

Gators ace Brady Singer has pitched at least seven innings in five of his seven starts and recorded a season-high 11 strikeouts in his start against Vanderbilt last weekend.

Tennessee has drawn 140 walks this season which ranks 43rd nationally, but they may run into some difficulty trying to draw walks against the Gators pitching staff. Florida issues the least amount of free passes in the SEC at a rate of 2.74 per nine innings. Singer has a 6.25 strikeout to walk ratio which ranks 47th nationally.

Gators on a Roll

Deacon Liput has found his groove at the plate of late. Over the last 10 games, Liput is hitting .366 with 11 RBI and two stolen bases.

On the mound, new Florida all-time saves leader, Michael Byrne has been virtually untouchable. He has seven saves and a minuscule 0.35 ERA this year.

I'm an above-average golfer with surprisingly great touch around the greens. Click on my twitter link for some sports talk.
@Ry_McGinn
Previous Could the New Orleans Pelicans surprise in the playoffs?
Next The Masters Round 1 Highlights: Spieth on Top, Tiger’s Return and Garcia’s Fiasco