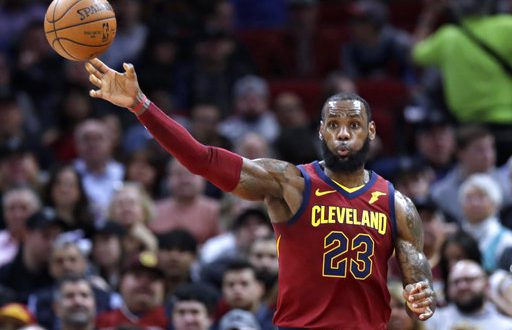 Cleveland Cavaliers' LeBron James passes the ball in the first half of an NBA basketball game against the New York Knicks, Wednesday, April 11, 2018, in Cleveland. (AP Photo/Tony Dejak)

NBA Playoffs Preview: The King and the West

After seven months of another long NBA regular season, playoff basketball is almost upon us. Eight teams will tip-off tomorrow followed by another eight on Sunday. NBA fans already have a few thrilling matchups to look forward to.

The first game of the NBA playoffs will be played by none other than the defending champions themselves. The Golden State Warriors will host the San Antonio Spurs in one of the most blockbuster first-round matchups in recent years.

Although, the Spurs will continue to be without All-star forward Kahwi Leonard, while Golden State will be without All-Star guard Stephen Curry. Both teams are without arguably their best player, but neither head coach has looked for any excuses when analyzing the series.

Friday night, the New Orleans Pelicans will travel to Portland to face Trail Blazers. Another star player will be out of action as Demarcus Cousins suffered season-ending surgery for the Pelicans before the end of the regular season.

On Sunday, the No. 4 seeded Oklahoma City Thunder will take on the Utah Jazz. Oklahoma City’s Guard Russell Westbrook is coming off his second consecutive regular season averaging a triple-double.

Westbrook’s teammate, Nick Collison, expects Westbrook will be aggressive and at his best against the Jazz.

Paul George is out of contract at the end of the season. It’s expected his next destination will largely be determined by how well the Thunder does in the 2018 playoffs.

To close out the weekend, James Harden and the Houston Rockets will take on the Minnesota Timberwolves. Tip-off will be at 9 p.m. ET. The Rockets had the NBA’S best record during the regular season, and Harden is the favorite to win this year’s regular season MVP award.

The Washington Wizards will visit the No. 1 seeded Toronto Raptors on Saturday at 5:30 p.m. The Raptors have been led by their star-studded backcourt all season long. They are also a top defensive unit. Head coach Dwayne Casey is favored to win NBA Head Coach of the Year for surprisingly guiding the Raptors to the summit of the Eastern Conference.

Ironically, it’s the Miami Heat that will be visiting the hottest team in the league on Saturday night.

The Philadelphia 76ers have won 14 games straight heading into the playoffs, despite being without All-star forward Joel Embiid. They managed to climb up to the No. 3 seed late in the season.

The Heat came away with a home overtime win on Wednesday over Toronto, 116-109, that helped slide them up to the No. 6 seed in the East. The two teams split a four-game series during the regular season.

Dwayne Wade, back in the playoffs with the Heat for the first time since 2016, said he expects a tough fight from the NBA’s hottest team.

On Sunday, the Boston Celtics will welcome Giannis Antetokounmpo and the Milwaukee Bucks to TD Garden. The Celtics will be without Kyrie Irving who suffered a season-ending surgery in early April.

But there is still plenty of young talent left on the Celtics’ squad, and head coach Brad Stevens has shown the ability to win with young players in the past.

Later, Lebron James and the Cavaliers will host Victor Oladipo and the No. 5 seeded Indiana Pacers. Tip-off is set for 3:30 p.m., as Lebron James, looks to play in his eighth consecutive final.

Guard Victor Oladipo said he knows it won’t be easy to topple the Cavs, but acknowledged that the Pacers have also been a consistent force all season.

Sports media and management student at the University of Florida. Content creator for ESPN 98.1 FM/ 850 AM WRUF.
@TheEdgarChavero
Previous Orange and Blue Scrimmage: Defensive Line Preview
Next ICYMI: Buchholz Baseball walks off to a 2-1 victory