Breaking Barriers: A Pioneer for Women in Sports

Written and edited by Jordyn Reed and Courtney Mims.

“By 1988…I became the country’s second national baseball columnist and we were reinventing the wheel.”

A pioneer for women in the sports world and the first female recipient of the J.G. Taylor Spink Award, Claire Smith, has accomplished a great deal in her life.

Smith is a former sports columnist who covered baseball for more than three decades and has worked as a news editor with ESPN for the last eleven years. Now, she plans to give back to students who aim to pursue a career in sports media by sharing her experiences in both life and career.

She has traveled to several universities across the country, including Syracuse, Columbia, NYU, George Washington, Howard, University of Missouri, University of Kansas, her alma-mater Temple and even stopped at the University of Florida in February.

With all of her success, one must wonder how her passion for sports began and how her career evolved.

Smith’s love for baseball began at an early age and was inspired by a passion her mother, Bernice, had for a particular team and player.

“I loved the Dodgers growing up and I loved Jackie,” Smith said. “I loved the idea of Jackie, the whole idea of integration of baseball.”

It would be an extreme understatement to say that number 42 inspired many. Jackie Robinson, the first African-American to play in Major League Baseball, broke the color barrier in the mid-1940’s when he started as the first baseman for the Brooklyn Dodgers. Robinson’s perseverance, attitude and commitment to equality inspired other athletes, the late Dr. Martin Luther King Jr., and of course, a young Claire Smith.

“To me, Jackie was the first Dr. King,” Smith said. “Dr. King told Jackie Robinson he wouldn’t have been possible if it weren’t for Jackie. Even as a child, I just admired what he did.”

While talking with Smith about her early passion for the game, she reflected on a memory she had as a young third grader at St. James Elementary School in Elkins Park, PA.

“The nuns took our third-grade class to the basement where the church was and showed us The Jackie Robinson Story, which starred Ruby Dee and, believe it or not, Jackie Robinson playing Jackie Robinson,” Smith reminisced. “So it was the first time I heard the voice. I saw the man, a beautiful human being—so putting the voice to the man, putting a human face on the man through the movie, it touched my heart and I was just in elementary school.”

Smith’s love for baseball only grew as she got older, but even with that passion, she decided to head in a different direction when she went off to college.

As her college years approached, Smith considered what she wanted to pursue and decided to chase her second love, politics.

“I wanted to run for office,” Smith said. “I wanted to be president so I figured, ‘who gets to do that?’ Lawyers get to do that.”

Smith attended Penn State and was pursuing a degree in political science with the hopes of becoming a lawyer. However, Smith soon realized that her second passion in life also came along with classes that did not peak her interest. After deciding this was not what she wanted to pursue, Smith changed her major a few times, saying that at one point she even was a history major.

“I did all of this and that, but I was kind of lost at sea,” Smith explained. “I eventually just dropped out.”

After leaving Penn State, Smith went home and began working in retail. She described her emotional state as being fairly miserable and still lost.

Finally one day, her father, William, finally asked her, “what is it you want to do?” Her response? “I want to work in baseball, I want to own a team, I want to own the Dodgers.”

“Well go back to school, do that,” Smith quoted her father. “Find a way. We’ve got you.”

Soon after this conversation, Smith transferred to Temple University and became a public relations major. For her degree, she was required to take a journalism course or two and the first time she walked into her class, she said, “it rocked my world.”

Smith described this as the point where she fell in love with the idea of becoming a journalist.

Getting that first job is a hard thing to do now in the sports industry and it wasn’t any easier back then. Smith said she applied for many jobs before landing the one for her.

But the one for her didn’t come until 1982, so instead, she got experience working for local newspapers in her hometown: The Bucks County Courier Times and the Philadelphia Bulletin.

Then, the chance came. The Hartford Courant hired Smith, but initially just doing feature stories on the players.  She was in the right place at the right time as the Yankees beat writer, Clemson Smith, hurt his knee and had to take a break.

“I went in, 1982 Yankees, that was the season of three managers, six pitching coaches, and 54 players on what is still a 25 man roster,” Smith said. “It was the zoo. It was crazy.” 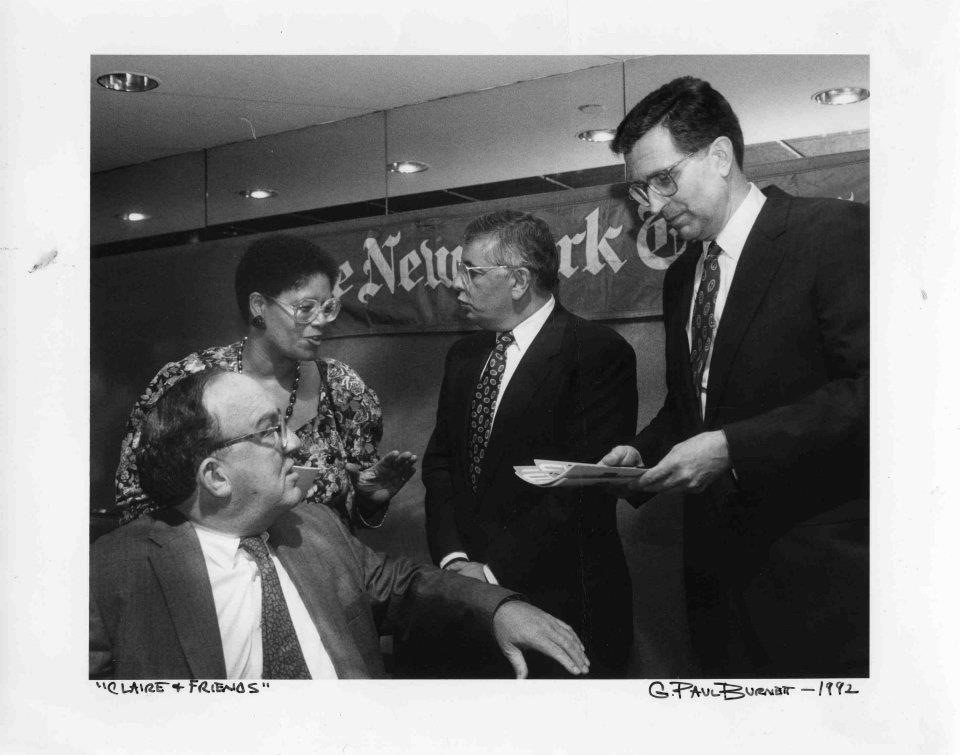 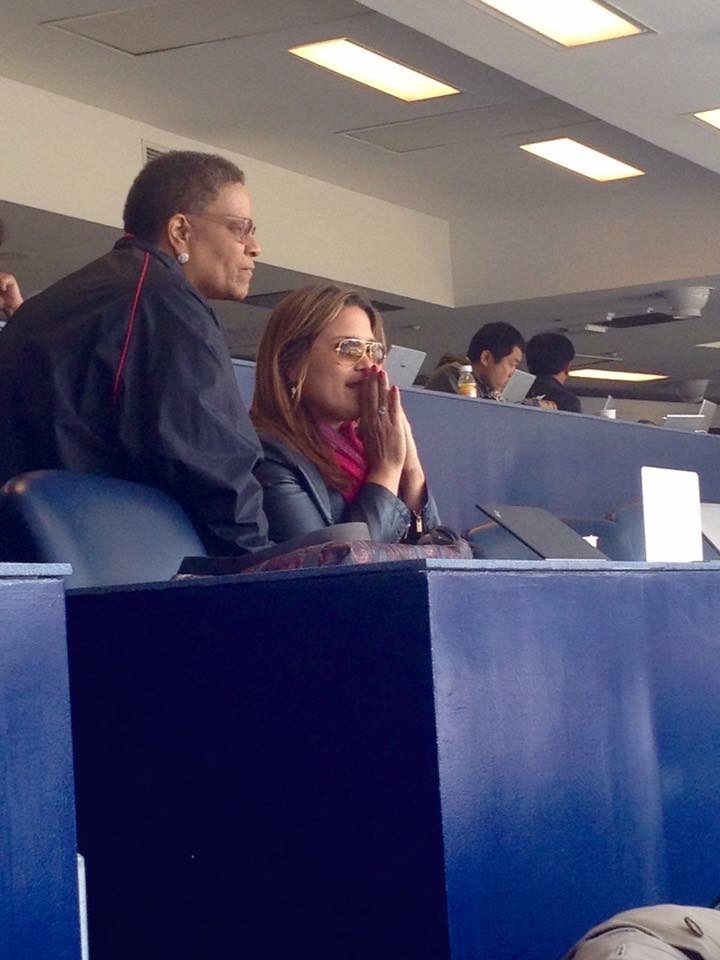 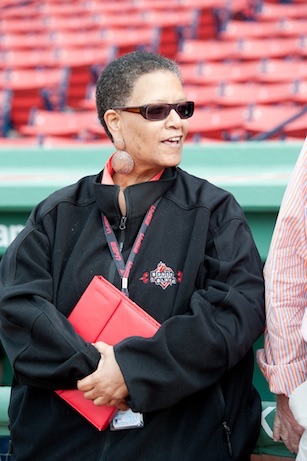 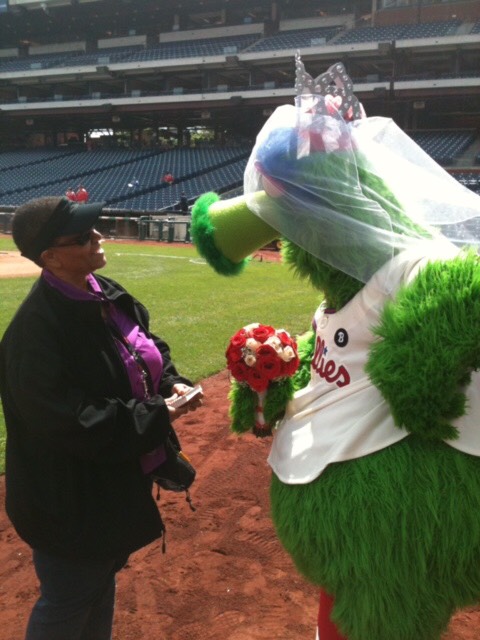 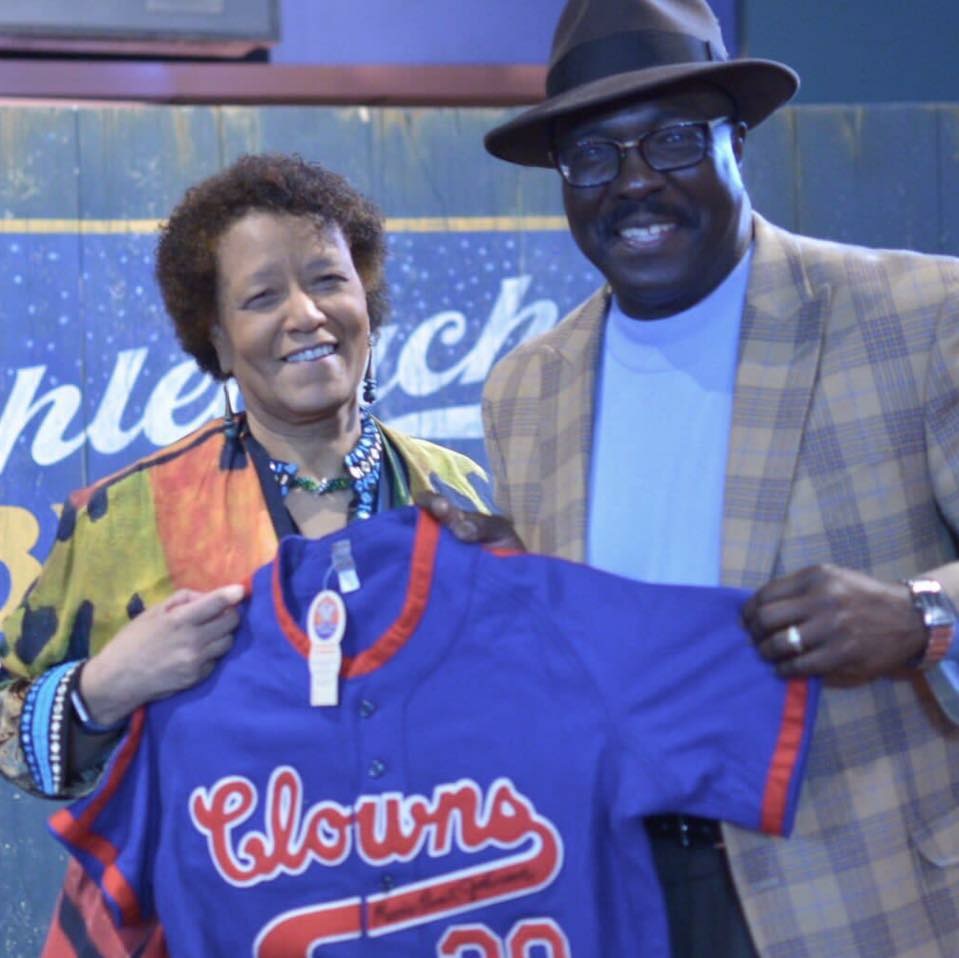 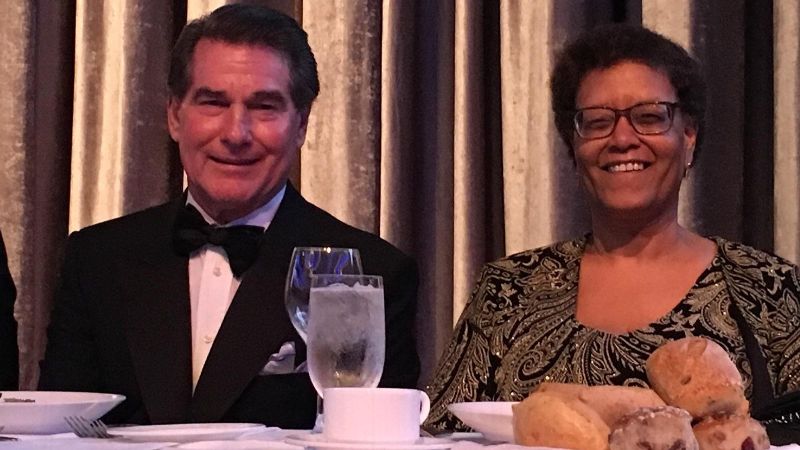 When Clemson came back in the fall, her editor said that if he took her off the Yankees beat, she would be fired. Smith got to stay with the Yankees, and Clemson moved to the Celtics beat instead.

Smith covered the Yankees from 1982 to 1988 before becoming the country’s second national baseball columnist.

“It was a lot of fun learning on the run. I mean, warp speed, covering one of the zaniest, most interesting teams in all of professional sports,” Smith said.

Smith said it was during this time when she came across the most resistance from players and coaches. Not the Yankees, but instead when the San Diego Padres came into town for the 1984 National Championship Series with the Chicago Cubs.

Smith was ejected from the clubhouse for being a woman and therefore couldn’t get quotes for her story after the game. But Smith wasn’t left in the dust. Padres player Steve Garvey came up to her after to give her quotes. His kindness at that moment touched Smith.

After some family time, Smith hopped over to the Philadelphia Inquirer where she spent her time working as both an editor and a columnist from 1998 to 2007. But, the paper was having some issues and Smith had to start thinking about the future once again.

“I survived a round of layoffs, but I didn’t honestly think I was going to survive the next round, so I started looking,” Smith said. “Low and behold, ESPN was looking too.”

In 2007, ESPN hired her as their coordinating news editor for all things baseball. She’s been there ever since.

As much as Smith loved what she did, the legacy she left for other female sportswriters was a big one. Her shoes are not easy to fill. 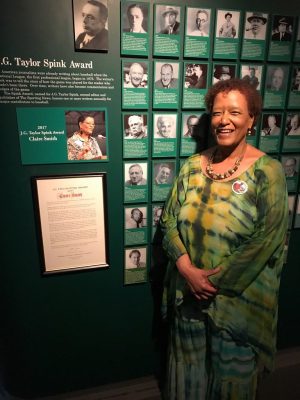 Smith paved the way for other females to enter the sports industry. She encourages them to be bold, to be daring.

The industry realized that in the summer of 2017. Smith was the 68th recipient of the J.G. Taylor Spink Award, but the first female to hold the honor.

“I got up and went to the front of the room and there were about 10 women in the group,” Smith said. “I asked them to join me because I wanted to share that moment with them and to thank them, but also to have us stand as one and applaud the gentlemen in the room. It takes a village and we wouldn’t be able to do what we do if it weren’t for that family of baseball writers.”

She recalled the time Garvey helped her many years ago and gave him a shoutout in her acceptance speech.

“Being on that stage with the living Hall of Famers while giving this speech, I just looked to my right and left,” Smith said. “I covered so many of them, as Yankees, as a national baseball reporter, I knew so many of them and so many of them have been so supportive during my career, that it was a way to say thank you.”

Smith said her life turned upside down from that day on. She had interview requests and appearances to go to, including multiple university visits.

Smith gave a lot of advice to UF students during the course of a day, but one common message throughout all her talks was about being yourself.

“Look yourself in the mirror every day if you have to and remind yourself of who you owe the most to and that’s yourself,” Smith said.

In all the years of working, Smith said her life has been wonderful and her career has been more than she could have ever hoped for.

“It was a dream, a living dream, a beautiful dream,” Smith said.