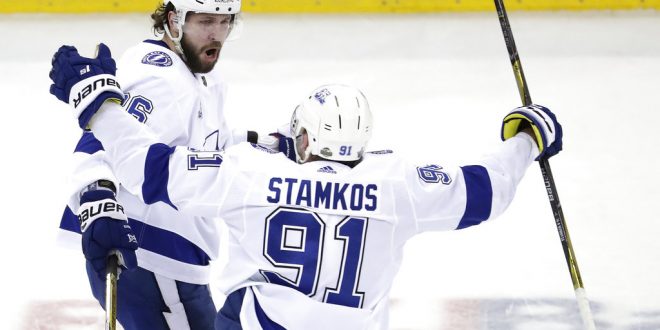 The Tampa Bay Lightning are now one game away from clinching a second-round spot in the Stanley Cup Playoffs. Last night, the Lightning topped the New Jersey Devils 3-1 in Newark to extend their series lead.

The Devils may have been first on the board, but the Lightning led by the end of the first period. J.T. Miller scored the first goal for Tampa Bay and Nikita Koucherov broke the tie four minutes later.

Koucherov then scored his second goal of the night with less than two minutes left in the third period.

AND YOUR TAMPA BAY LIGHTNING TAKE THE 3-1 LEAD IN THE SERIES #GoBolts pic.twitter.com/X7p17frpUj

Nikita Koucherov was the uncontested star of the night. Besides his two goals, Koucherov (along with Steven Stamkos) picked up an assist on J.T. Miller’s goal.

But, Miller made waves, as well. He set up both of Koucherov’s goals after scoring his own.

Goaltender Andrei Vasilevskiy did a phenomenal job guarding the gate.

He made a whopping 27 saves on the night, including stopping three breakaways.

A Dirty Play Can Save the Day

At the end of the first period, a scuffle between two Devils and a Lightning player resulted in three roughing charges.

But, a questionable no-call hit by Koucherov may have helped the Lightning out. Midway through the first period, it looked like Koucherov may have hit New Jersey’s top defenseman Sami Vatanen above the shoulders and out for the remainder of the game.

Take a look for yourself.

Sami Vatanen headed to the locker room after this hit from Nikita Kucherov. pic.twitter.com/tw3Bap5zHK

Without Vatanen, the Devils had a more difficult time defending the top seed in the Eastern Division. Expect this play to return throughout the Stanley Cup playoffs.

The two teams head back to Florida on Saturday. So far, the Tampa Bay Lightning have the sixth-highest attendance rates in the NHL. If enough people show out at Amalie Arena and the opportunity to clinch the series motivates the Lightning, the series will end at five.