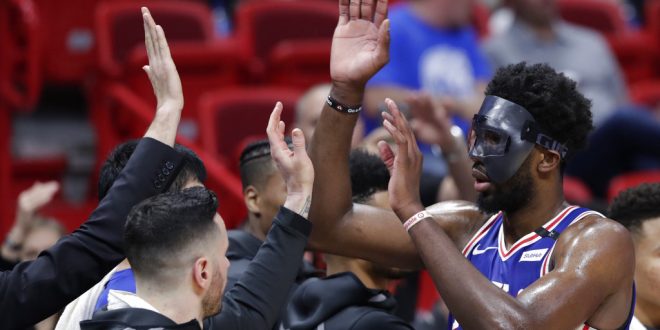 Philadelphia 76ers' Joel Embiid (21) celebrates with his teammates late in the fourth quarter of Game 3 of a first-round NBA basketball playoff series against the Miami Heat, Thursday, April 19, 2018, in Miami. The 76ers won 128-108. (AP Photo/Lynne Sladky)

Coming off an orbital fracture injury and touching the court for the first time since March 28, Joel Embiid’s loud return showed the 76ers chances of proceeding to the second round.

After a close three quarters that had Miami with a slight chance of victory, the pace quickly picked up as the 76ers showed out in the last 12 minutes. At the start of the fourth quarter, Philadelphia was only up by two, but ended up scoring 32 points in the fourth, while Miami finished with 14. Though many thought the protective mask Embiid was wearing was just going to slow him down, he decided to trust the process which made his return a frightful one.

Two minutes was enough time to turn this playoff game into a one-man show. With Philadelphia up by 7, Embiid made a 16-foot jumper shot and just 40-seconds later made a 23-foot three-point jumper assisted by Dario Saric. After a loose ball foul by Miami Heat’s Justice Winslow, Embiid was able to go to the line and make both free throws. This action lead the Sixers to a 119-105 cushion.

The All-Star center lead his team in scoring and finished with 23 points, seven rebounds, and four assists. But there is no “I” in Team: Marco Belinelli and Dario Saric both scored 21 points, and Ben Simmons was close behind putting up 19 points. Embiid expressed his satisfaction with his team’s ability to take out Miami.

With the return of Joel Embiid, Miami has to put in a little more effort in order to not only tie the series 2-2, but also attempt to win the first round in the playoffs. With a home court advantage, Miami may be able to pull something together, but they better think fast because they didn’t take advantage of being at home their last match-up.

Game 4 is scheduled to start at 2:30 tomorrow and can be watched on TNT.

Previous NHL Playoffs Recap: Bruins and Capitals in Control
Next Will the Browns Take a QB in the First Round of the NFL Draft?