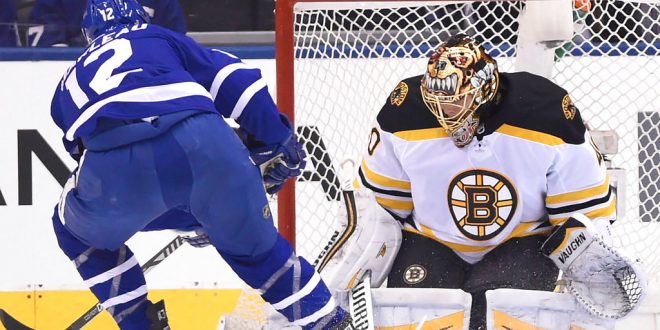 Round 1 of the NHL Playoffs are fully underway with a few teams already booking their ticket into the second round via series sweeps. However, many teams are still battling it out.

The Boston Bruins extended their series lead to 3-1 over the Toronto Maple Leafs behind two assists from David Pastrňák. At the end of the first period, things were tied at one goal apiece. However, the Bruins were able to tack on one in the second and third to secure the win.

.@pastrnak96 on his assist to @bmarch63 for last night's game-winner: "I tried to get it in Marchy's hands…and it got through." pic.twitter.com/cGoHm1fbGJ

Bruins coach Bruce Cassidy commended his team for having enough to get past a strong opponent away from home. Cassidy said that teams need to have that ability to do well in the playoffs.

Going into the game, the Columbus Blue Jackets had a 2-1 series lead over the Washington Capitals. However, nothing went right for the Blue Jackets on Thursday. The Capitals won 4-1, and the Blue Jackets only managed to score in the third period, when they already had no chance of coming back.

John Tortorella, the coach of Columbus, was less than pleased with his team’s performance. In the press conference after the game, he gave the media very little other than “we sucked” or “we laid an egg.”

Tortorella eventually walked out of the press conference.

Barry Trotz, coach of the Capitals, was understandably calmer. Game 5 will be played in the Capital One Arena, where Trotz says the Capitals need to get the job done to take the series lead.

The first Game 5s of the NHL Playoffs are tonight. First at 7 p.m. is the all-Pennsylvania affair between the Philadelphia Flyers and the Pittsburgh Penguins. At 7:30, the Winnipeg Jets host the Minnesota Wild. Lastly, the Colorado Avalanche visit the the Nashville Predators. All three home teams lead their series 3-1 and have the opportunity to end things on their home ice.