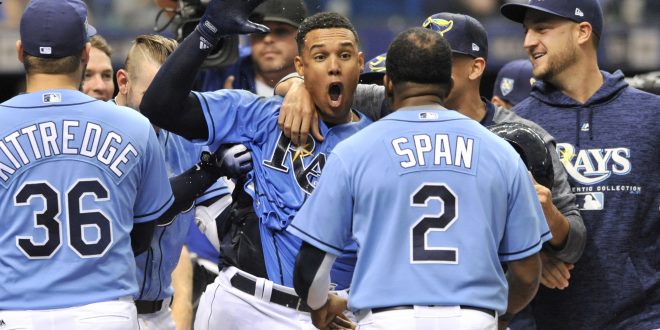 Rays Get a Walk-Off Win, While Marlins Continue To Struggle Late

It was a tale of two Sundays as the Tampa Bay Rays won an exciting home game with a walk-off, two-run homer, while the Miami Marlins lost a tight game on the road due to crucial mistakes. With these games, the seasons for both teams begin to take drastically different shapes.

The Rays extended their winning streak to 4 games with an 8-6 win over the Minnesota Twins at Tropicana Field. While the Rays ultimately pulled out the victory, they struggled to score consistently against the Twins throughout the game.

The Rays opened up the scoring in the bottom of the first inning with a C.J. Cron two-run home run, but they wouldn’t score again until the sixth. In between, the Twins scored 3 runs to take a 3-2 lead. Rays infielder Joey Wendle tied the game up with a RBI single that sent fellow infielder Daniel Robertson home. The Rays then piled onto the scoring with a three-run homer from Adeiny Hechavarria to give them a 6-3 lead with three innings left to play.

The Twins would not go down without a fight, however, as a Miguel Sano RBI single in the seventh and a Brian Dozier two-run RBI single in the eighth inning eventually tied the game up 6-6. The game went on into the ninth inning, and the Rays were able to hold the Twins scoreless. That gave them a chance to win in the bottom of the ninth.

CJ Cron singled to lead off the ninth inning, and that brought Carlos Gomez to the plate. Gomez was 0-for-4 for the day and was in the midst of a 2-for-34 slump. To anyone watching, he seemed like the last person to send the Rays home victorious. Those people would be wrong.

It only took one pitch for Gomez to win the game. The 90.7 mph fastball was driven back into the left-field stands, 402 feet away. It was Gomez’ first career walk-off home run. With this victory, the Rays moved to 8-13 on the season and are on an upswing after their early season struggles.

The Cost of Late Mistakes

The Miami Marlins did not have as stellar of a Sunday as the Tampa Bay Rays, as they lost 4-2 to the Milwaukee Brewers. This gave the Brewers their first home series sweep since 2008.

The Marlins scored first on a RBI double from infielder Justin Bour that brought home catcher J.T. Realmuto. They held a 1-0 lead until the bottom of the 4th inning, when right fielder Christian Yelich hit a two-run homer against his former team to take a 2-1 lead. The Marlins would not see the lead again.

The Marlins were able to keep the scoring to a minimum early on, mostly due to the stellar work from pitcher Caleb Smith. Smith held a team that averages 8.3 hits a game to just two hits in six innings. He retired the first nine batters he faced and did not give up a hit until the fourth inning. he also had 10 strikeouts and gave up no walks. Unfortunately, it did not matter later.

.@CalebASmith12 is done for the day after setting a career high with 10 K in 6 innings. Marlins trail 2-1. #JuntosMiami pic.twitter.com/x74j4JZufv

The first of many costly moments for the Marlins came in the bottom of the sixth inning. The Marlins loaded the bases with no outs, looking to score. Then, Brewers reliever Jeremy Jeffress came in and proceeded to retire the next three batters to get out of the jam. The stranded Marlins returned to the dugout with nothing to show for.

Entering with the bases loaded with nobody out is no problem for @JMontana41 as he gets Lewis Brinson to take the bait and end a scoreless inning! #ThisIsMyCrew pic.twitter.com/3xc1mlLgS6

The Marlins next mistake came from Justin Bour. Miami pulled within 3-2 in the eighth inning and had Bour on first base with 1 out. Brian Anderson flew out to centerfield, but Bour lost track of the outs and continued to run the bases without tagging. The Brewers noticed and executed an easy double play to end the Marlins scoring threat.

In the bottom of the eighth, the Brewers extended the lead to 4-2 with a RBI single from Jesus Aguilar. It put the game out of Miami’s reach, giving the Marlins their 4th straight loss and their 7th in the last 8 games.

The Rays look to continue their winning ways as they begin a treacherous 9-game road stretch. They start the exodus at the Baltimore Orioles on Tuesday, April 24, at 7:05 P.M.

The Marlins are 5-16 on the season and will try to snap their losing streak as they travel to Los Angeles to take on the LA Dodgers Monday, April 23, at 10:10 P.M. 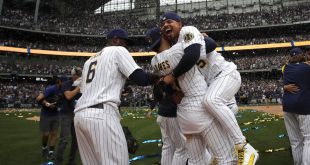