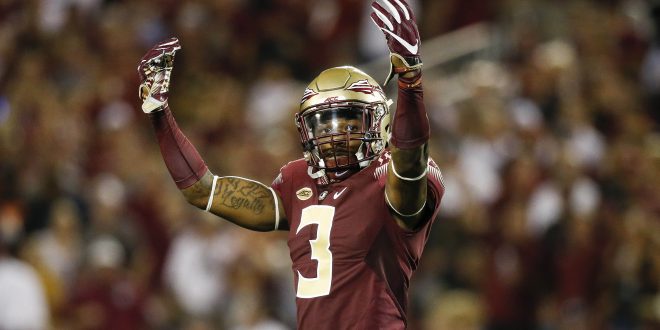 Coming out of this year’s NFL Combine, Florida State safety Derwin James was one of the most highly graded among the players who were invited. With the 2018 NFL Draft days away, is he truly ready to make the jump?

Over his three seasons as a Seminole, James compiled 186 tackles, 110 of which were solo. He also registered 15 tackles for loss as well as 5.5 sacks. The red shirt sophomore out of the Sunshine State also managed to score one touchdown on three interceptions to go with 15 passes defended. He accomplished all of this without playing past week two in his sophomore season after tearing the meniscus in his left knee.

The defensive back graded out with a 6.44 which gave him the ninth-highest score among combine invitees. Washington Defensive Tackle Vita Vea was graded directly above him while Alabama Wide Receiver Calvin Ridley scored just below James.

The safety out of Florida State weighed in at 215 pounds. He also measured six feet and two inches with 33 inch long arms and nine and a half inch hands.

James ran a 4.47 forty yard dash, which placed him outside of the top ten among defensive backs, though it places him seventh among safeties. He also logged a 40 inch vertical jump which placed him fifth among his position group. James completed 21 reps on the bench press while also performing a 132-inch broad jump. Both of those scores were good enough for third place among all safeties at the combine.

As would be expected, the Seminole defensive back feels he is ready for any job that’s thrown at him. The safety believes that his abilities are such that he can line up anywhere on the field that he is asked and perform at the highest level.

In a matter of days, everyone will see how ready one NFL franchise feels he is. One thing is for sure, Derwin James is certainly not lacking in confidence.