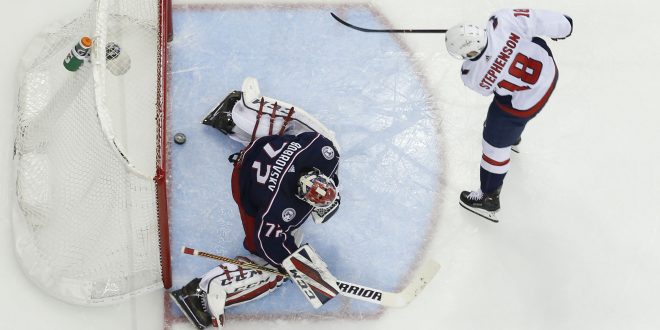 Washington Capitals Win the Series Against Columbus Blue Jackets, Advance to Round 2

In Columbus Monday night, the Washington Capitals were victorious against the Columbus Blue Jackets, 6-3. After a long series that spanned over six games, the Capitals were able to exhale for a moment when they secured their spot in Round 2 in the NHL Playoffs.

YOUR WASHINGTON CAPITALS ARE MOVING ON TO ROUND TWO! #ALLCAPS #STANLEYCUP pic.twitter.com/1UrtixW6yr

The first period of the game was a slow one. Dmitry Orlov had assists from Chandler Stephenson and Matt Niskanen to get the first goal of the game. However, in the second period, Alex Ovechkin scored twice answering the Blue Jackets first score in the middle of the period.

The second score from Ovechkin was a vital power play goal. This gave the Capitals an opportunity to score with one less Blue Jacket on the ice when Seth Jones was penalized for holding Ovechkin. This was Ovechkin’s 51st playoff career goal.

Ovechkin said him and his teammates stuck to the plan.

The exciting third period is where Washington secured their win. Columbus had scored again when rookie Pierre-Luc Dubois slap shotted the puck into the net at the beginning of the period. However, the Capitals answered with back-to-back goals from Devante Smith-Pelly and Stephenson.

Nevertheless, the Blue Jackets weren’t going to let them off easily when Nick Foligno put one in the net. Ultimately, Lars Eller upped the Capitals score to six when he scored with 14 seconds left on the clock.

Capitals head coach Barry Trotz knew they just had to win some games.

The Blue Jackets had an impressive regular season ending in 45-30 and advancing to the playoffs with the number one seed wildcard spot in the Eastern Conference.

Also, Foligno knows it’s tough to win in the playoffs.

In the second round, the Capitals will face the Pittsburgh Penguins in Round 2. The Penguins won their series, 4-2 and had a regular season record, 47-29.

Round 2 schedule is to be announced.

I am a fifth-year journalism major, specializing in sports and media. My favorite sport to watch and cover are college and NFL football. When I'm not doing that, I enjoy hanging out with my cat, going to concerts and traveling.
@sportsabrina
Previous Stanton Hits 5th Homer with Yankees
Next The Boston and Toronto series comes down Game 7