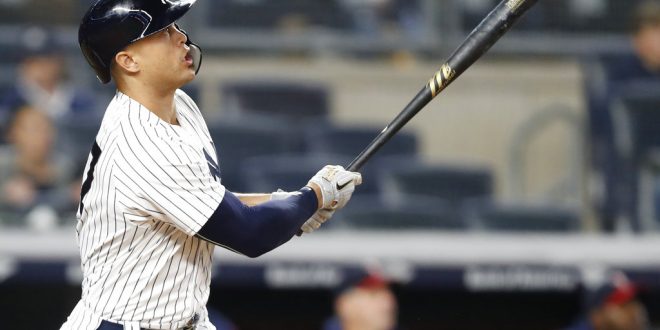 After Monday’s 14-1 win over the Minnesota Twins, it’s safe to say the New York Yankees are off to an inconsistent start. One of those runs was scored by recent acquisition, 28-year-old Giancarlo Stanton.

115.6 mph off bat on that homer from Giancarlo Stanton. Monster. #Yankees pic.twitter.com/9A8OdLFozM

It’s been a cold awakening filled with a lot of boos for the slugger who spent 7 seasons in Florida. After a 59 home run season with the Miami Marlins, the 6’6 outfielder earned the National League’s Most Valuable Player title. Stanton was then traded in exchange for Starlin Castro and minor leaguers Jorge Guzman and Jose Devers. On Opening Day at his new home, he added to HR’s against the Toronto Blue Jays, making him the first Yankee to have a multi home run Opening Day game since Joe Pepitone. Since then, Derek Jeter’s Yankees are 12-9. But that’s not to say Stanton hasn’t struggled in the meantime. He had a 50 at-bat homerless streak and was 5-for-50 at Yankee Stadium.

But with Monday’s four hits, Stanton’s batting average went from .185 to .224 and increased his season runs to 5. Yankees fans are hoping this will be the breakout they’ve been waiting for. And Stanton says he’s been getting adjusted to his new home.

Stanton will try and keep the the energy going when the New York Yankees take on the Minnesota Twins. First pitch for the Yankees will be at home on Tuesday at 6:35 p.m.

Previous Thunder on the Edge of Elimination After Losing in Game 4 Against the Jazz
Next Washington Capitals Win the Series Against Columbus Blue Jackets, Advance to Round 2