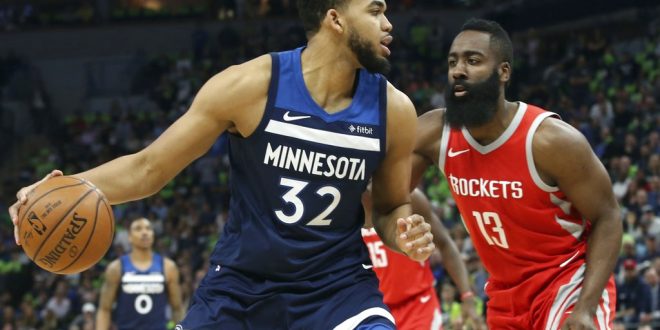 Timberwolves at Rockets could end first round series Wednesday

It was a last-ditch effort to save what dignity was left for the Minnesota Timberwolves as guard Marcus Georges-Hunt tried to save a rebounded shot from outside the paint and tip the ball back in the bucket.

The tip wasn’t enough as Houston Rockets guard Aaron Jackson quickly grabbed the ball off the rebound and dribbled it out to mid-court, running out the clock and helping the Rockets take a 119-100 win in Minneapolis.

Heading into the locker rooms for halftime Monday night, things were pretty tight between the Timberwolves and the Rockets. The Rockets having a one-point lead. However, things drastically changed in the third quarter when the Rockets scored 50 points alone, compared to the Timberwolves’ 20.

Minnesota tried to clean things up on the home court during the fourth quarter and scored 31 points, but it wasn’t enough as Houston scored another 19 to distance their lead.

Minnesota guard Jimmy Butler noticed the difference between the halves, saying in the beginning they contained the Rockets, but they “didn’t do a great job of that in the third quarter.”

Other teammates were not as “positive” as Butler. Some even went so far as to call the loss at home “disappointing” and Minnesota center Karl-Anthony Towns said the fans brought the energy, but the team couldn’t deliver.

However, Towns was already looking at the game ahead after Monday night’s contest. “We’ve got to get ready for the next game,” he said. “We don’t have any time to put our heads down and look for excuses.”

It’s safe to say that Minnesota is stuck in a corner. A very tight corner, actually. The Rockets currently lead the series 3-1 heading into Wednesday night’s matchup in Houston.

The series isn’t over, but guard Derrick Rose says the team has to be better. “It’s not over yet,” he said.

Looking ahead, the Timberwolves have to figure out a way to take control of their side of the court. Rockets point guards James Harden and Chris Paul capitalized on weak moments, leading their team to a major win on the road. In Monday’s game, Harden and Paul combined for 61 points. If the Timberwolves want to make it past the first round, they can’t let another performance like this slip by.

It will be an uphill battle as Minnesota tries to take a road win, already down two games in the series.

Wednesday night’s game is scheduled for a tip off at 9:30 in Houston at the Toyota Center.

Mari Faiello is a second-year journalism student and sports writer for the Alligator. She covers the University of Florida's softball team and has previously covered UF men's tennis, UF women's tennis and UF volleyball. She has worked at the paper since Fall 2017. She has worked at ESPN 98.1 FM - 850 AM WRUF since Spring 2018. Her favorite sports are volleyball, college football and hockey (Tampa Bay Lightning).
@@faiello_mari
Previous Celtics Beat the Bucks, Marcus Smart is Back
Next Students Weigh In on Major Changes Coming to UF Athletics