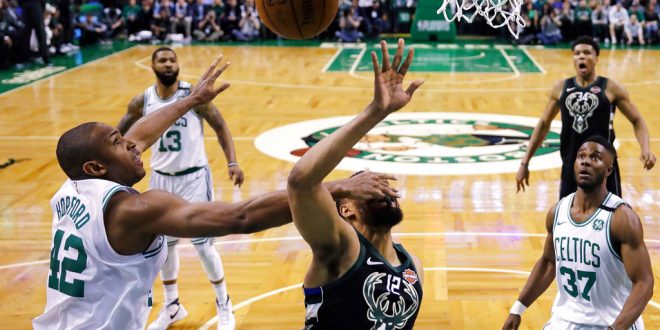 Celtics Beat the Bucks, Marcus Smart is Back

Marcus Smart may have been the Boston’s missing ingredient in this series against the Milwaukee Bucks. In game five of the first round series, the Celtics beat the Bucks 92-87.

The home team has won all five games in the series which puts Boston up in the series, 3-2. Last nights game was Smart’s first game since mid-March because of a right thumb surgery. Protected by a splint, Smart came off the bench and had nine points, five rebounds, four assists and three blocks. He did all of this in only 25 minutes of game time play. Previously this season, he averaged 10.2 points per game.

Hear from Smart on getting back and playing with an injury:

Along with Smart’s great game five, Al Horford continued to shine during postseason play. In 38 minutes of playing time, Horford led the Celtics with 22 points, 14 rebounds, three assists and two blocks. This gave him a double-double game by the third quarter. This postseason he has averaged 18.2 points per game.

After being pounded in back-to-back losses to the Bucks in Milwaukee, Horford and Smart were the duo of the night in Boston. Smart says that last nights win was big for the team and that their confidence is back to being high.

Smart lobs it up, Horford throws it down! pic.twitter.com/tyPPXXAHd8

The Bucks highest scoring player was Khris Middleton with 23 points, three rebounds and two assists. Jabari Parker had 17 points and eight rebounds. Even with a near triple-double game, what might have been the determining factor for Milwaukee’s loss was Giannis Antetokounmpo’s game. He had a series-low 16 points, 10 rebounds and nine assists. In the last 10 games, Antetokounmpo has averaged 23.3 points per game and 10 rebounds. He said that he thought his team got the ball to him but that it just wasn’t his night.

Milwaukee lost to the Raptors in game six in the first round last year. Antetokounmpo remembers last years playoff run and says that he and the team just have to play hard.

Since the series is 3-2, there are still two more games to be played. With the at-home wins that these two teams have had so far, Game 6 will prove if the first round series pattern will continue on.

Milwaukee will host Boston Thursday with tipoff scheduled for 7 p.m.

Junior studying telecommunications- news at the University of Florida. Multimedia Sports Reporter for ESPN Gainesville as well as a Multimedia Journalist for WUFT News.
@acheney21
Previous The Fire is Out for the Heat: Philadelphia Moves On
Next Timberwolves at Rockets could end first round series Wednesday