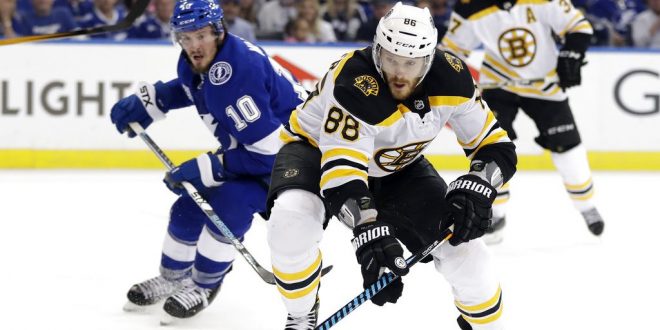 The Tampa Bay Lightning host the Boston Bruins tonight in Game 2 of the Eastern Conference semifinals.

Many thought Tampa Bay would come into the game holding a 1-0 series lead. Instead, it’s the Bruins who hold the lead after an emphatic 6-2 win at Amalie Arena in Game 1.

That puts even more pressure on the Lightning to pull out a home win in Game 2, or else face the prospect of heading to Boston down 2-0 in the series. Tampa Bay head coach Jon Cooper knows his team needs this win to get back in the series.

“They got six [goals]. In the end, we need to raise the level of our game to get back in this series,” Cooper said.

A big key to getting back in the series for Tampa Bay will be finding a way to slow down Boston’s top line of Brad Marchand, Patrice Bergeron and David Pastrnak.

That line wreaked havoc in the first round against Toronto, and propelled Boston to the road win in Game 1. It accounted for three goals (Bergeron twice, Marchand) and 11 points, consistently creating chances and putting pressure on Lightning goaltender Andrei Vasilevskiy.

Specifically, Pastrnak has been having an impressive postseason, as he’s tied with Pittsburgh’s Jake Guentzel for the most points so far in the playoffs, with 17 through eight games.

David Pastrnak (@NHLBruins) is the 13th different player in NHL history to record at least 17 points through his team’s first eight games of a postseason – and first since Mario Lemieux w/ PIT in 1992. #NHLStats #StanleyCup pic.twitter.com/GaX5PL0e4c

Safe to say, it’s imperative for Tampa Bay to limit the damage Boston’s top line can do and put more pressure on it’s other lines.

“Whoever’s out there against them, obviously, can’t stress enough how aware you have to be of each and every member of that line and be smarter with your decisions with the puck,” Lightning captain Steven Stamkos said.

Keeping up the Pressure

On the flip side, Tampa Bay will be looking to get pucks on net and hope that it gets a few more bounces to go its way.

In Game 1, they outshot Boston 36-24, but Tuukka Rask played one of his best games of the playoffs. He made 34 saves, and allowed no goals after an incident in which he allowed a goal after the blade of his skate was knocked off by a puck.

Still, that shows the Lightning were active in the offensive zone, something they’ll look to replicate in Game 2.

“Besides the score, I thought we played pretty well,” Stamkos said. “We didn’t score on our chances, especially our line. I felt we had some looks, but this time of the year, you have to capitalize.”

Puck drop from Amalie Arena in Tampa is set for 7 p.m.