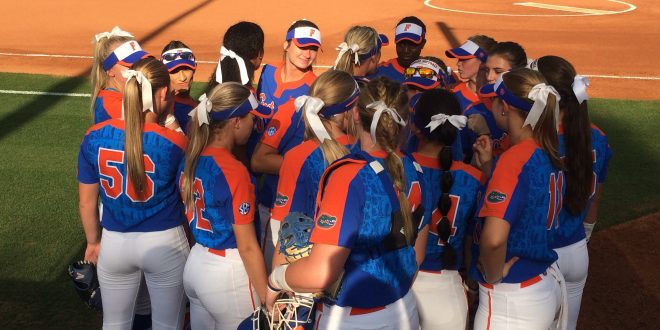 Lorenz, DeWitt Leads Gators to Series Win Versus No. 13 LSU

The fifth-ranked Florida softball team won 5-3 to win the series versus the No. 13 Louisiana State Tigers at home on Sunday. Florida was down 3-0 in the fifth but stormed back with four runs in the bottom of the inning. A three-run triple for Amanda Lorenz unloaded the bases to tie the game. Immediately after, Nicole DeWitt hit an RBI single to give the Gators a 4-3 lead.  Junior right-hander Kelly Barnhill (24-1) allowed three runs on three hits in the top of the fifth inning but finished with 14 strikeouts in the game. Florida is now 20-0 this season when posting more than 10 strikeouts in a game (15 of those games with Barnhill in the circle).

More than half of the game included a pitching battle by Barnhill and LSU pitcher Shelbi Sunseri (7-3). Barnhill pitched a perfect game through four innings with eight strikeouts. On the other hand, Sunseri pitched four scoreless innings while also hitting as a designated player. A single to center field from Lorenz and another to right field from DeWitt were the only hits in the game until the fifth inning.

The game changed completely when Shemiah Sanchez hit a line drive home run to left field, giving LSU a 1-0 lead. This was Barnhill’s 13th home run allowed this season and the first earned run for LSU against Barnhill. The Tigers weren’t slowing down after their first hit of the game. A two run homer gave the Tigers a 3-0 lead but Barnhill recorded her 10th strikeout of the game to end the top of the fifth after allowing three runs on three hits.

Jordan Roberts singled off the wall in left field to start the comeback in the bottom of the fifth against LSU. Reynoso was walked and Jordan Matthews came into the game to pinch hit for Alex Voss. With two runners on base, Sunseri was relieved by Maribeth Gorsuch. Gorsuch would strike out Matthews swinging with the top of the lineup up next. Gorsuch then walked freshman Hannah Adams to load the bases.

Just like that, Amanda Lorenz tripled to left center to unload the bases and tie the game. DeWitt hit a single to right field to bring in Lorenz, resulting in a 4-3 lead for the Gators with only one out. This was DeWitt’s 14th RBI in the last 13 games. Despite the rally, the inning ended after Aleshia Ocasio grounded out.

Barnhill returned allowing no runs or hits and striking out right fielder Taryn Antoine for the third time to make it 11 strikeouts through six. The Gators began the bottom of the six with another walk. Katie Chronister pinch ran for Roberts and stole second. A Reynoso sacrifice bunt moved Chronister to third and she eventually scored after a sacrifice fly from Voss to extend the lead to 5-3.

Barnhill needed three outs in the seventh inning to complete the series win against LSU. She struck out Doyle, Sanchez and Sunseri in 16 pitches. Florida is now 30-33 all-time versus LSU and 13-13 at home.

Florida now has a two game lead in the SEC with three games to play and those three games will come at Missouri next weekend.

Sports Journalist @ESPNGainesville, @VAVEL, @VAVEL_USA, @WUFTNews. Telecom at @UF. Miami Aficionado. Views are my own. RT's ≠ endorsements.
Previous Historic 1998 Gator Baseball Team is Honored
Next Lightning Look to Get Back In Series Against Bruins in Game 2