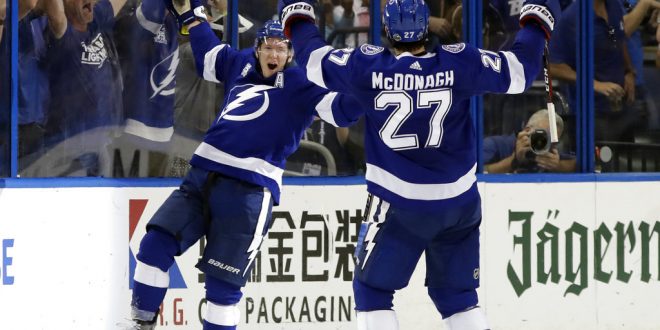 Lightning triumph over Bruins in Game 2

The Tampa Bay Lightning rallied in Game 2 to even up their series with the Boston Bruins with a 4-2 victory. The win comes after a tough Game 1 for Tampa Bay, where Boston scored 6 times.

The key difference in Game 2? Limiting Bruins Bergeron and Nash, who were the big factors in Boston’s decisive Game 1 victory.

The Lightning continued to remain aggressive on offense, leading the series in hits and shots. They also continued to limit their turnovers allowing 13 in the series to Boston’s 23.

Lightning center Brayden Point contributed heavily to Tampa Bay’s offensive output in Game 2. Point was involved in every goal they scored in the match, scoring one and assisting on the other three.  Point is the team’s leader in postseason assists and second highest in postseason points behind Nikita Kucherov.

Another notable aspect of Point’s performance: it is only the third four-point game in Lightning history,

Lightning head coach Jon Cooper sang praise for point after their home victory, saying that he competes and plays hard.

The Bruins have been operating with an emphasis on quality over quantity, taking less shots then the Lightning in both games, but couldn’t get the puck in the net in Game 2.

Goalie Tuukka Rask had an impressive 27 saves but it wasn’t enough to withstand Tampa Bay’s offensive output. Torey Krug and Charlie McAvoy both contributed a goal, their third and first of the postseason respectively.

Bruins’ head coach Bruce Cassidy said that he expected the tame to play with intensity after losing Game 1 at home. He expects them to keep this intensity up as they head to Boston for Game 3.

If the Bruins want to turn thing around at home, they’ll have to limit turnovers and increase their production on offense

The Lightning will travel to take on the Bruins at their home ice on Wednesday. The puck is set to drop at 7 p.m.