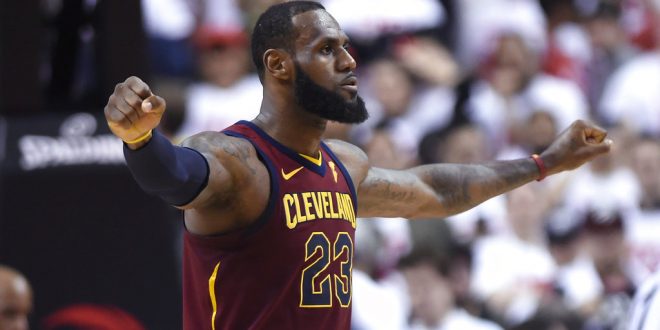 The NBA playoffs continued to provide excellent theater Tuesday night. Cleveland edged out an overtime thriller in Toronto on the back of another LeBron James triple-double. Meanwhile in the Bay Area, Stephen Curry’s return from injury propelled the Warriors to a close win over the Pelicans.

Cleveland came in to this series with Toronto having won the past six playoff games between the two teams.

After Game 1, make it seven.

LeBron James ties the game with a filthy fadeaway shot it in crunch time. pic.twitter.com/4o3rJxkfLL

For Toronto, DeMar Derozan had 22 points, Kyle Lowry put 18, and Jonas Valanciunas had a monster game with 21 points and 21 rebounds, but missed a potential game-winning putback at the end of regulation.

Despite the triple-double, James admitted he played “probably one of my worst games of the season,” as he shot 12-for-30 from the field.

In a game that Cleveland didn’t lead at all during regulation, James’s “off-night” (by his standards) was lifted up by the best help James has received all playoffs.

Tristan Thompson was solid on both ends, chipping in with 14 points and 12 rebounds. Kyle Korver pitched in with 19 points, Jeff Green with 16, and J.R. Smith showed his scoring abilities by dropping 20 points, including 5-for-6 shooting from three-point range. That performance from Smith is the first time someone other than James has scored 20 points or more in these playoffs.

Golden State easily handled New Orleans in Game 1, but Game 2 might have gone the other way had it not been for the return of Stephen Curry.

In his first game since suffering an MCL injury on March 23, Curry came off the bench to score 28 points to lead the Warriors to a 121-116 victory to take a 2-0 series lead. He was back to his usual sharpshooting ways, hitting five three-pointers and hit his signature transition pull-up daggers.

Meanwhile on the Pelicans, the trio of Jrue Holiday (24 points), Rajon Rondo (22 points) and Anthony Davis (25 points) combined for 71 points. New Orleans’s downfall came via their bench, as it was outscored by Golden State’s 44-13.