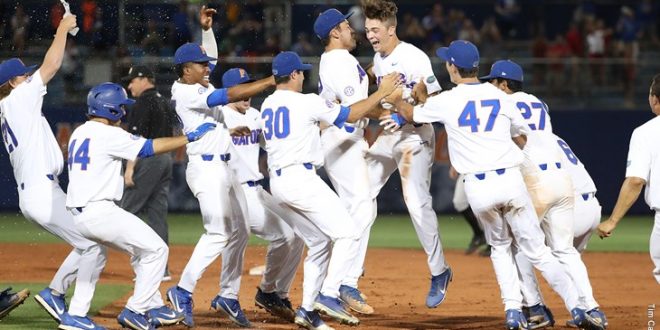 The top ranked Gator baseball team fought from behind twice to defeat 15th ranked Georgia 7-6 in Gainesville on Friday night.  A big crowd of 5,279 witnessed the come from behind win.

How The Gators Got The Job Done

Junior Brady Singer took the mound for Florida and got a lead in the third inning.  Nelson Maldanado hit a two run single to give Florida a 2-0 cushion.  In the fourth, JJ Schwarz blasted a solo homer, his 11th, to give the Gators a 3-0 lead.  But in the top of the sixth, Georgia scored five runs to take the lead.   With the bases loaded and one out, Florida first baseman Keenan Bell dropped a throw he was making to a covering Singer at first and a run scored.  One out later, LJ Talley hit a grand slam homer to give the Bulldogs the lead.

But the Gators immediately tied the game in their half of the inning.  Schwarz plated the runs with a single as he ended his night 3 for 4 with three runs batted in.  Georgia scored a run in the ninth inning on a passed ball by Schwarz after he was crossed up on the pitch selection by closer Michael Byrne.

Down a run, the Gators loaded the bases thanks to singles by Keenan Bell and Nick Horvath and Deacon Liput being hit by a pitch as he was trying to execute a sacrifice bunt.  Nelson Maldonado drove in pinch runner Andrew Baker with the tying run on a sacrifice fly. Jonathan India was then walked intentionally as Georgia decided to load the bases.

Wil Dalton completed the comeback win when he launched a 3-1 pitch to center field before the ball was dropped by Tucker Maxwell, allowing Horvath to score easily.

More Brilliance From The Ace

Singer was solid in his last regular season match-up in Orange and Blue as he completed seven innings while only giving up one earned run. It is the sixth consecutive start that he has pitched seven innings or more.

As the end of the season approaches, it is a positive sign that J.J. Schwarz is in a rhythm offensively.

The captain is on a tear as he is currently riding a seven game hit streak. During the streak, Schwarz is 14 for 28 (.500) with seven RBIs. On Friday night he even made some UF history as he passed Josh Adams for third all-time in hits in program history.

Friday night’s win is UF’s first walk off victory since Jordan Butler helped the Gators walk it off against Rhode Island on March 10.

On Saturday afternoon, Florida will be looking to crown themselves SEC regular season champions for the 15th time in program history and the sixth time in the Kevin O’Sullivan Era. It would be the second year in a row that the Gators were the top team in the conference during the regular season.

Game two between Florida and Georgia begins at 1 p.m. from McKethan Stadium. The game will be televised on the SEC Network and can be heard on the Gators IMG Sports Network.

With a win on Saturday, the #Gators can clinch a second-straight @SEC title.