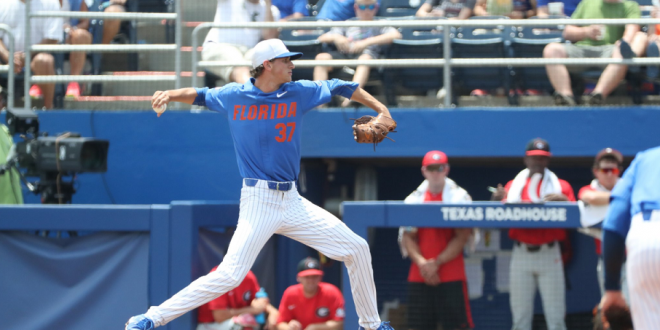 No. 1 Florida Baseball Throttles No. 15 Georgia to Clinch SEC Title

The Florida Gators (41-11, 20-6) defeated the Georgia Bulldogs (34-16, 15-11) Saturday to secure at least a share of the SEC Regular Season Title for the second straight season. The title is the 15th in school history and the fifth attained under the guidance of head coach Kevin O’Sullivan. The 9-3 victory at McKethan Stadium also clinched the series for the Gators and they have now won every SEC series this season and a total of 15 in a row.

JJ Schwarz led off the bottom half of the second with a single to extend his hitting streak to eight games and then tied the game at 1-1 in the bottom of the fourth when he connected on a one-out solo home run to left. The home run is his 11th of the season.

The Gators would later go ahead in the fifth. After a Deacon Liput walk, Nelson Maldonado hit a two-run home run into the stands in left to give Florida a 3-1 lead.

The game was shortly after put away in the sixth. In total, the Gators pushed across six runs. All of them came via home run. Blake Reese hit the first grand slam of his career, the third of the year for the Gators, over the scoreboard in left to make the score 7-1.

After the game, Reese commented on what his mindset was while hitting grand slam after he got off to a rough start. He had struck out twice and committed an error earlier in the game.

Jonathan India then added icing on top of the cake with a two-run home run to left that was just barely fair to make it a 9-1 Gators’ advantage. The home run is his 16th of the season.

Georgia got the scoring started in the top of the second. Cam Shepherd and LJ Talley led off the inning with back-to-back singles and then advanced to second and third via a passed ball. Kowar responded well to the situation. He limited the damage to one run after inducing a strikeout and two groundouts.

After allowing the early unearned run, Kowar found his groove. At one point he struck out six straight and retired 11 in a row. He picks up the win and improves to 9-2 on the season. Kowar struck out nine total Bulldogs on Saturday and has had fewer than five strikeouts in just three starts in 2018.

After another scoreless inning of work in the seventh, Kowar exited the game. He walked only one during his outing and had a strike percentage of 69.6 percent. After the game, battery mate Schwarz said when Kowar has all three pitches working he’s really tough to hit.

“Once he started landing his breaking ball that’s when things started to get going,” Schwarz said. “I feel like that’s how it always is with him.”

“It was a terrible breaking ball during the first two innings. It really wasn’t even close to being competitive…,” Kowar said. “…Being able to get that working early in the third inning was really big.”

Tommy Mace took over in relief in the eighth. Georgia was able to do some damage via a two-RBI single through the left side off the bat of Patrick Sullivan. That made the score 9-3, the eventual final. Mace worked out of any further damage in the inning and would go on to pitch a scoreless ninth.

After the game, Kevin O’Sullivan gave credit to his players and the staff for bringing home the SEC Regular Season Title.

“I’ve enjoyed every single day,” he said. “Watching these guys compete, I’ve been so impressed with how they’ve gone about it.”

O’Sullivan said RHP Tyler Dyson will be out for a week to 10 days with a shoulder injury. He received a cortisone shot and O’Sullivan thinks the injury explains a lot of his recent struggles.

Tomorrow’s game starts at 1 p.m. and is senior day for Florida. Schwarz and Nick Horvath will be recognized before the game.