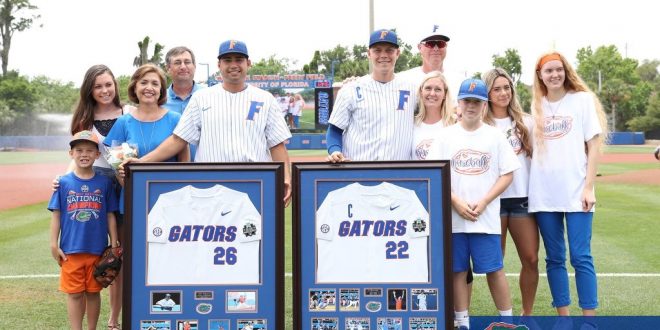 Florida Gator Baseball fell to the Georgia Bulldogs 4-1 in there final home game of the regular season. However, the Gators did win the series 2-1 and on Saturday, the Gators clinched the SEC regular season title. No. 1 Florida now has a 41-12 overall and 20-7 in conference record. While No. 15 Georgia has a 35-16 overall and 16-11 in conference record. Before the game Sunday, a pair of Gator seniors were honored before the game.

JJ Schwarz and Nick Hovath were recognized for their time at the University of Florida before the start of the game. Both men were teammates in high school at Palm Beach Gardens High School.

Head Coach, Kevin O’Sullivan, expressed his emotions over the seniors.

Team Captain, JJ Schwarz, broke the record today for the most games started by any player in UF history with 260 (surpassing Preston Tucker now with the Braves). Schwarz started his career at Florida as a catcher, but due to team injuries during his sophomore year, he moved to 1st to help the team. This year, O’Sullivan really wanted Schwarz to get more time at catcher. Schwarz currently has a .333 batting average with 12 homers on the season.

Nick Horvath started his career off at Santa Fe before coming to Florida for his Sophomore season. Horvath is extremely versatile on the field by playing both outfield and pitching. Horvath has pitched in three games so far this year and is batting .271.

Seniors, JJ Schwarz and Nick Horvath were honored before the game and their moms got to show off their arms. #SeniorDay #MothersDay  #Gators @ESPNGainesville @GatorsBB pic.twitter.com/0IBfVvbRjY

In the bottom of the second, Wil Dalton walked and Austen Langworthy singled to LF, which advanced Dalton to second. Then, Dalton stole 3rd and Langworthy followed to 2nd. Later, Blake Reese grounded out to short and Dalton scored. To make the Game 1-0 Gators.

The Dawgs answered back quickly when C.J. Smith singled to LF. Then, Aaron Schunk also singled to LF and advanced Smith to second. Soon after, Keegan McGovern hit a 3 run homer to give the Dawgs a 3-1 lead.

In the top of the fourth, Cam Sheperd for the Dawgs walked. Then, LJ Talley singled through the left side and Sheperd advanced to second. Mason Meadows then bunted back to Leftwich, however, Leftwich slipped while going after the bunt and loaded the bases. Webb hit an infield fly to second. Then, Smith grounded out to short and Sheperd scored to make the game 4-1 Bulldogs, which would eventually be the final score.

Jack Leftwich pitched 4.2 innings and gave up 9 hits for 4 runs with a 4.26 ERA. He was relieved by LHP, Andrew Baker who pitched two scoreless innings only giving up one hit. In his 17 appearances, Baker has a 2.36 ERA.

Now time for the bats to get going. Smith, Reese and Horvath due up.

Three more pitchers, Hunter McMullen, Jordan Butler and Michael Byrne, also saw the mound and were able to hold off the Dawgs from scoring.

The Florida Gators still have one more regular season series when they take on Mississippi State in Starkville. The first game of the series is Thursday at 7:30 p.m. on the SEC Network+.