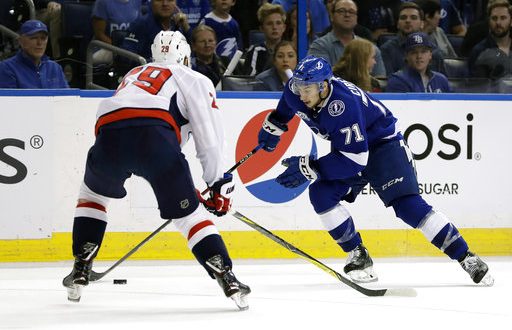 The Eastern Conference Finals have been an odd and unpredictable series so far. The visiting team would win four of the five games played. With a 3-2 series lead, the Tampa Bay Lightning will hope to continue that pattern. The series travels to Washington against the Capitals tonight for Game 6.

The Lightning have the opportunity to win the series Monday night. They know they need to close it out sooner rather that later. The Washington Capitals are a very strong team that has the ability to win the final two games if given the chance.

Tampa Bay coach Jon Cooper says his team needs to do everything it can to avoid a Game 7.

The Lightning are going to try to keep their momentum and not let Washington get anything started. Tampa Bay right wing Ryan Callahan says it will be hard to do this. He  alsothinks his team is more than capable.

How we stack up tonight for #TBLvsWSH Game 6.

Tune in at 8pm on @nbcsn! pic.twitter.com/SMHCeugJPH

After losing Game 5, Washington knows they haven’t put themselves in the most ideal position.

Tampa Bay has proven to be a resilient team. Now, the Capitals need to show they are as well if they want their hopes of winning the Stanley Cup to stay alive.

With the Lightning also performing at their best right now, it only makes it more difficult for Washington to win the series.

Capitals head coach Barry Trotz says his team won’t quit and will respond to adversity just as it has all year.

The Capitals have historically been known for their post-season struggles. It’s beginning to look like this series isn’t going to end much different for them. Washington has allowed the Lightning to battle back and take the series lead after dropping the first two games at home.

Since the beginning of the conference era, dating back to the 1974-75 season, only two teams in 41 occasions have won the first two games of a conference final or league semifinal and failed to win the series.

This statistic bodes well for the Capitals, but unfortunately for them, not all of history is on their side.

Washington left wing Alex Ovechkin isn’t worrying about the past history. He is taking a simple approach to Monday night’s game and just wants to extend the series another day.