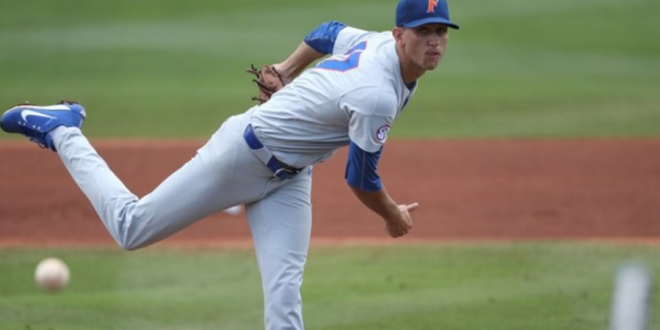 CWS Preview: Florida Faces Texas with Season on the Line

The Florida Gators (47-20) find themselves in a position they’re rarely in heading into Tuesday’s elimination game against Texas (42-22): the team needs to bounce back following a Brady Singer loss. Over the past two seasons, he’s lost only seven games. Florida has a long road ahead of them if they are to pull off back-to-back championships. Dating back to 1947, only 10 teams have ever won a title after losing their opening game.

Tuesday will mark the sixth time Kowar has started the game following those seven Singer defeats. In the previous five outings, he has a record of 3-0. Only one of those games came this season. On March 24 against Arkansas, Kowar threw six innings and gave up two runs on four hits. Florida’s offense erupted with 17 runs, providing plenty of support.

Kowar will be looking to carry the momentum from his start in super regionals against Auburn into Tuesday’s game. He had struggled in his previous three starts but turned things around against the Tigers. The seven-inning outing is one of only two games in which he didn’t issue a single walk.

Leading the way offensively for Texas is junior Kody Clemens, son of Hall of Fame pitcher Roger Clemens. He leads the team in batting average (.352), home runs (24) and RBI (72). The rest of the offensive supporting cast is well-balanced. All eight players that have played in over 60 games this season are hitting .250 or higher.

On the base paths, sophomore David Hamilton is one of the biggest running threats in the country with 31 stolen bases on the season. Meanwhile, on the mound, sophomore right-hander Blair Henley (6-6, 3.32 ERA) will get the start.

Florida is 1-2 all-time against the Longhorns. All three matchups have taken place in Omaha. Additionally, only one of those games, the most recent, took place in the Kevin O’Sullivan era. In 2011, the Gators defeated Texas by a score of 8-4.

The win or go home matchup between Florida and Texas will get underway 65 minutes after the conclusion of the Mississippi State-North Carolina game. You can listen to the Gators attempt to extend their season via ESPN 98.1 FM & 850 AM. The game will also be televised on ESPN.

I'm an above-average golfer with surprisingly great touch around the greens. Click on my twitter link for some sports talk.
@Ry_McGinn
Previous Harry Kane Gives England a 2-1 Win Over Tunisia in Extra Time
Next Tampa Bay Rays Blow Four-Run Lead in Houston