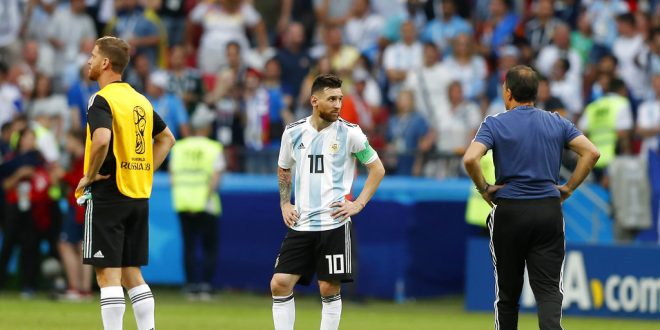 Argentina's Lionel Messi, center, stands at the end of the round of 16 match between France and Argentina, at the 2018 soccer World Cup at the Kazan Arena in Kazan, Russia, Saturday, June 30, 2018. France won 4-3. (AP Photo/Frank Augstein)

The 2018 FIFA World Cup’s early stages will go down as one chock-full of upsets. The defending World Cup champions saw an early exit, and two megastars had their runs in Russia cut short.

4 teams have booked their spots in the Quarterfinals!

Who will join them? pic.twitter.com/elU0GJHzzI

Defending Champs Out of Round of 16

To start, the upset train would gain its first victim in the group stage of the World Cup. After finishing last in Group F with three points, Germany would make an unexpected early exit in the tournament.

Germany have been eliminated from the 2018 FIFA World Cup. pic.twitter.com/e89QLD2Y9C

In the three group stage match days, Germany would go 1-2 against Sweden, Mexico and South Korea. In the first upset of the tournament, the Germans would taste defeat at the hands of Mexico, before defeating Sweden 2-1, despite getting a red card thrown their way in the matchup. South Korea would emphatically stamp their exit ticket, shutting out Germany 2-0 in their final match day.

South Korea beat Germany to keep the defending champions out of the Round of 16! pic.twitter.com/EWbpBrfSyV

After winning the World Cup in 2014, Germany’s early exit is full of shock and surprise. No one would see this team going out so early, let alone end the group stage in the bottom. Starting at -300 odds to win the group, the odds continued to shift in Germany’s favor to win the Cup again. This loss though would start a chain of upsets in the weekend matchups that were equally as shocking.

In the second round of the tournament, two megastars would get an early exit from the World Cup. The Lionel Messi-led Argentina team fell to France on Saturday in a 4-3 matchup. The Cristiano Ronaldo-led Portugal team would also get bounced from the tournament, falling to Uruguay 2-1 in Sochi.

The European Champions are out!

Uruguay get a brace from Cavani to beat Portugal and advance to the quarterfinals for just the 2nd time since 1970. pic.twitter.com/lvY7ppYJub

It's the end of the road for Argentina's FIFA World Cup dreams. pic.twitter.com/M6Q8F6jstS

Messi would not look like his usual self in the World Cup. Only putting up one goal in the tournament against Nigeria, the soccer superstar, and arguably one of the best in the world, would experience defeat a lot sooner than many believed.

Ronaldo, however, would have a bit more success in the scoring department, totaling four in this Cup. He would have these four goals across two games, against Spain in their opener, and Morocco in their second group stage match.

Despite the efforts of the two-best soccer players in the world, these were two of the biggest upsets in World Cup history. The two mightiest players have fallen, leaving room for a curse to strike in Monday’s first bit of action.

Who Could Be Next?

All in all, this World Cup has been unpredictable thus far. The first slate of action on Monday will see Mexico looking to break the “fifth-game curse” against Brazil, starting at 10 a.m. Finally, Belgium will look to overcome Japan to advance to quarterfinals, with that game beginning at 2 p.m.