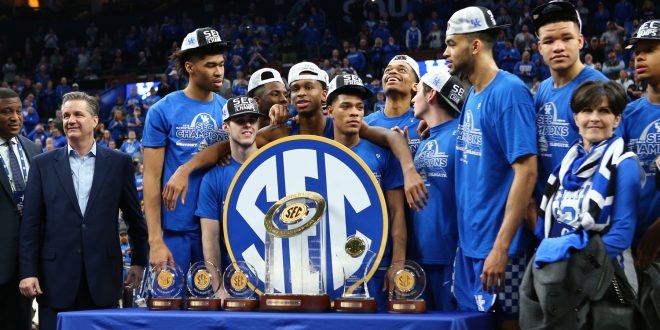 We all know Kentucky somehow pulls off a good season every single season. Even at their worst, they are still doing better than most in their conference. This past season didn’t bode so well for the Wildcats, losing a total of 11 games during the regular season and during the NCAA tournament a loss against Kansas State in the Sweet Sixteen.

But, as mentioned above, they somehow still seemed to impress. With an extremely young team, they managed to win 26 games and win the SEC Tournament after beating Georgia, Alabama and Tennessee. Basically, the Wildcats are the Patriots of NCAA College Basketball.

However, it’s not good to dwell on the past so let’s get into what this season will hold for the team.

Nothing like getting up and down the floor to get our day started. pic.twitter.com/gzWlmuaXxM

Safe to say, the Wildcats have a lot of talent on their roster this season. They also have players coming back. Returning to the team are P.J. Washington, Quade Green and Nick Richards, who all could start if they can beat out some of the sweet freshman talent coming in.

That talent is lead by 5-star point guard Ashton Hagans, the top PG in his class. They also have Immanuel Quickley, Tyler Herro, Keldon Johnson and E.J. Montgomery. Also, we can’t forget graduate transfer Reid Travis, coming in from Stanford.

This will be Coach John Calipari’s oldest team in three years. He said that turnover is something they deal with every year, but it’s the trust of all the players that really makes the process easier.

Is this Kentucky team No. 1?

There’s been a lot of buzz around this Kentucky team because of how much talent they have on their roster. Many different news outlets are throwing out that they could be the No. 1 team this year. There’s no denying that they have really boosted their offense from last season.

All this buzz should make a team a little nervous, but Coach Calipari says it’s not going to bother them. They already talked about what they should focus on instead.

And that focus is on the upcoming schedule. Not too many teams have the upper hand over Kentucky, except maybe one obvious one, Kansas. Kansas is the only team that could fight them for the No. 1 title, only because they have a similar set up to the Wildcats heading into the upcoming season. Jayhawks Head Coach Bill Self has a roster that is full of experience and talent.

Don’t worry, that Kentucky-Kansas matchup will be happening next season on January 26 at Rupp Arena so we will get to see those top two teams go at it. It quite possibly will be the best matchup in the Big 12/SEC Challenge.

Even if they aren’t No. 1 overall, Kentucky will for sure be at the top of the SEC standings and will pose a big challenge for the rest of the teams in the conference.

Kentucky starts their 2018-19 season on August 8th in the Bahamas for their Foreign Tour. Then, they start with some regular season action in November.

Courtney Mims is a junior telecommunications major at the University of Florida. She enjoys covering all Gator sports and drinking gallons of Starbucks coffee while doing so.
Previous Tennessee Basketball Facing Lofty Expecations
Next FIFA World Cup: Quarterfinals Update