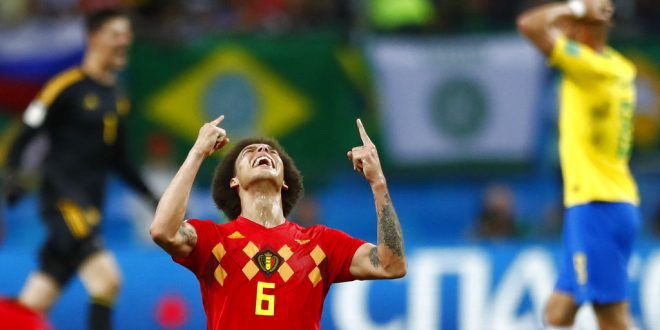 Belgium's Axel Witsel, centre celebrates after the final whistle as Belgium defeat Brazil in their quarterfinal match between Brazil and Belgium at the 2018 soccer World Cup in the Kazan Arena, in Kazan, Russia, Friday, July 6, 2018. Belgium won the game 2-1. (AP Photo/Matthias Schrader)

France Gets it Done

The French national football team is going to the World Cup semifinals for the first time since 2006. France made plays when they needed to, including a pair of goals and multiple crucial saves. French goalie Hugo Lloris came up with a spectacular save in the 43rd minute that preserved the French lead.  Both teams had 11 shots on goal, but France came up with 4 saves while Uruguay had none.

France got goals from Varane and Griezmann AND kept the shutout to advance to the semifinals.

Watch the highlights of Uruguay vs France in our 90' in 90" ⬇️ pic.twitter.com/Zru12sAcxZ

The first goal of the match came from Raphael Varane in the 40th minute with an assist by Antoine Griezmann. Griezmann would end up scoring France’s second goal of the match in the 61st minute. Griezmann was perhaps France’s best player on the field today with his aggressive play on offense. In addition to Griezmann, France got a very good performance out of Paul Pogba, who proved to be a very poised leader for the French team. After the match, Pogba told the media how happy he is with the team’s progression throughout the tournament.

Paul Pogba and France are in their first World Cup semifinal since 2006.

In the second quarterfinal match of the day, Belgium got off to a quick start against Brazil. Belgium scored their two goals of the day within the first 31 minutes of the match. Both teams were aggressive early on, but an own-goal from Brazil’s Fernandinho in the 13th minute gave Belgium momentum.

In the 31st minute, Belgium showed off their speed and skill with a goal by Kevin De Bruyne from outside the box.

Brazil’s common theme for the match was blown opportunities. Brazil had many scoring chances that fell short, much like their comeback effort. Thiago Silva missed a chip shot in the opening minutes, Fernandinho had an own-goal, and Coutinho came up short in the 83rd minute with an opportunity to tie.

How did Thiago Silva not score?? pic.twitter.com/g4YI5iMztP

Brazil had plenty of scoring chances in the second half due to their aggressive offense, but Belgium ultimately made enough plays to hold on to the win.

After picking up quarterfinal wins, France and Belgium will play each other with a spot in the World Cup Final on the line.

France vs. Belgium will be on July 10.