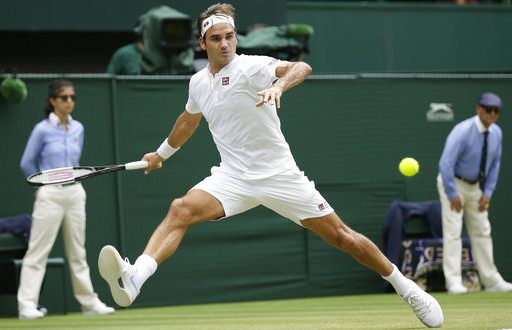 Men’s Round Of 16 Comes To A Close At Wimbledon

All but one spot in the men’s Wimbledon quarterfinals has been set after Monday’s Round of 16, and many of the top names are still alive.

The only match that has yet to come to a conclusion is the one between Juan Martin del Potro and Gilles Simon. After more than three hours, it has been suspended due to darkness and will resume on Tuesday.

Top seeds Roger Federer and Rafael Nadal have cruised their way into the quarterfinals.

Federer advanced to a record-extending 16th Wimbledon quarterfinal with a 6-0, 7-5, 6-4 victory over Adrian Mannarino. Federer has now won 32 straight sets at Wimbledon. This moves him within one straight-sets victory of breaking his previous longest streak of 34 that he set back in 2005-2006.

The former two-time champion at the All England Club will now appear in his first Wimbledon quarterfinal match since 2011, when he finished runner-up to Novak Djokovic.

After struggling with recent injuries, Djokovic is back in the mix at the top. He easily advanced to the quarterfinal round, defeating Karen Khachanov 6-4, 6-2, 6-2.

The quarter-finals await for @DjokerNole

The Serbian shows more than a few signs of the form that has won him #Wimbledon three times, defeating Karen Khachanov 6-4, 6-2, 6-2 pic.twitter.com/fuM0Q2nsN4

American John Isner might be most well-known for his marathon match against Nicolas Mahut back in 2010, but he has a chance to be known for much more this year. He advanced to the quarterfinals in straight sets over Stefanos Tsitsipas.

Prior to this year’s tournament, Isner had never been past the third round, and this will be just his second-ever quarterfinal at a major.

Kevin Anderson will also have a chance at this year’s title after coming out on top in a tight match with Gael Monfils. This is also his first Wimbledon quarterfinal appearance after losing in the fourth round the past three years.

Kei Nishikori and Milos Raonic’s time at Wimbledon will also be continuing as they will be looking to upset higher seeds. After dropping the first set in his fourth round match, Nishikori battled back and escaped an upset, winning 4-6, 7-5, 7-6, 6-1. Meanwhile, Raonic took down American Mackenzie McDonald 6-3, 6-4, 6-7, 6-2.