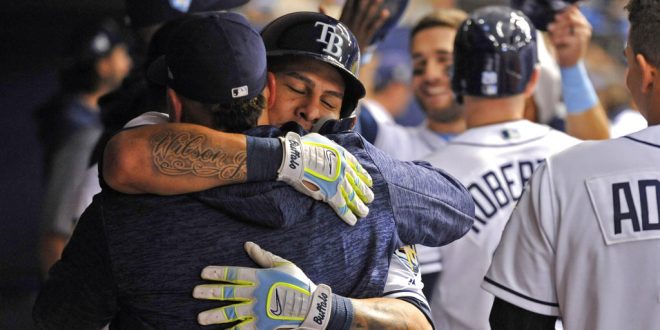 Both the Tampa Bay Rays and the Miami Marlins continued their respective homestands on Tuesday night, looking to pick up crucial victories before the All-Star Break begins early next week.

The Tampa Bay Rays (47-44) continued to play well on Tuesday night, taking care of the struggling Detroit Tigers (40-54) behind consistent pitching and a strong bottom half of the third inning.

The Rays have now won four games in a row, and 13 out of their last 14 at Tropicana Field.

Tampa Bay used five pitchers, leaving Detroit incredibly uncomfortable at the plate for most of the game.

The Tigers were able to break through for two runs off three hits in the 9th, however.

That’s when the Rays turned to Sergio Romo to record the final out and collect his 10th save of the season.

Romo did what he was asked to do, striking out Detroit hitter Ronny Rodriguez to end the game and give Tampa Bay the victory.

Tampa Bay’s bats got hot in the bottom of the third, punishing Detroit starting pitcher Matthew Boyd for five runs off three hits.

The Rays had already plated two runs in the inning when Wilson Ramos stepped up to the batter’s box with two on and two out.

The AL All-Star crushed a pitch into the right field stands, giving him his 14th home run on the season.

The surging Rays will look to stay hot on Wednesday afternoon, closing out their three-game series with the Tigers.

You can catch coverage of the game on ESPN WRUF, starting at 11:30 a.m.

Jesús had a quiet night at the plate by his standards, but he needs your support now more than ever! #WeBelieveInJesús https://t.co/IWBuX9WQFi pic.twitter.com/iPMx1krGay

The Miami Marlins (38-56) were outlasted by the Milwaukee Brewers (55-37) on Tuesday night in Miami, in a game that was close for a majority of the contest.

The Marlins have now lost four of their last six and find themselves in last place in the NL East.

Miami held the lead after the first inning, picking up a couple runs with one out in the bottom half of the first.

That lead would be short lived, however, thanks to a four-run inning for the Brewers in the second.

The Marlins did cut the lead to 5-4 in the fourth inning when a Brian Anderson groundout allowed pitcher Pablo Lopez to score.

Brewers pitching would shut down Miami from then on though, only allowing two hits for the rest of the game.

Milwaukee added a few insurance runs in the eighth and ninth innings to put the game out of reach.

The Marlins will look to avoid a series loss against the Milwaukee Brewers in the rubber match on Wednesday night at 7:10 p.m.