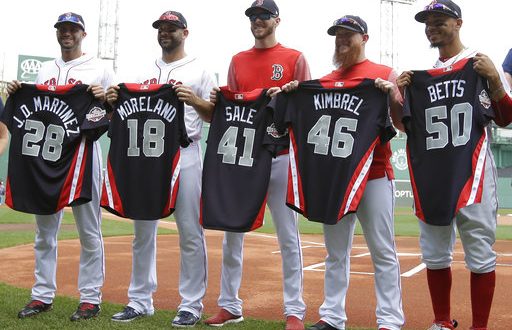 The teams have been announced, the snubs have been noted, and replacements have been added to the rosters. The American League team, in particular, made some waves, but both teams are now set to take the field in the Midsummer Classic.

Despite this being an All-Star game, the amount of big-time players with an abundance of star power seems to be a little disproportional, in favor of the American League.

The National League, however, will still be represented by league stars like Bryce Harper and Javier Baez, among others.

Here’s a look at the starting lineups for each squad:

These lineups are STACKED.

Which squad has the edge? pic.twitter.com/X9GwbKq7Jd

After the announcement of the All-Star rosters, a lot of controversy broke out surrounding who was left off the team but shouldn’t have been.

Snell had an American League-leading ERA and a 12-4 record at the time the rosters were announced. He had 132 strikeouts and held his opponents’ batting average to .183. All of this makes it hard to understand why he was left off the roster.

Clearly, it was hard for Snell’s teammates and other players around the league, too, because they spoke out in favor of him being added to the team.

Now, with Corey Kluber being forced to miss the All-Star game, Snell will serve as his replacement on the team. He’ll be the third pitcher to take the mound for the AL, according to manager A.J. Hinch.

For the National League side, there wasn’t as much of a controversy. Selecting the NL roster was less complicated thanks to not having to include any players at the DH position. Because of this, there was more space on the roster for more players from varying positions.

Red Sox ace Chris Sale will get the start for the AL, while Nationals ace Max Scherzer will take the mound for the NL.

This start is a big one for both pitchers for different reasons.

For Sale, this is his third straight All-Star game start for the American League. He’s only the third pitcher ever to start the All-Star Game in three consecutive years, joining Lefty Gomez (1933-35) and Robin Roberts (1953-55).

Scherzer, meanwhile, will be getting the start at his home stadium in Washington. He also started in last year’s game in Miami, as well as at Citi Field in 2013.

For the second straight year, your starters for the #AllStarGame presented by @Mastercard are Chris Sale and @Max_Scherzer. pic.twitter.com/7h46KXkwHt

The Rays’ role in the All-Star game was affected over the weekend.

Catcher Wilson Ramos, who won the fan vote and was supposed to be starting, suffered a hamstring injury and will be sidelined for the game.

This would’ve been a dream homecoming for the former Nationals player, but instead, he’s likely heading to the disabled list.