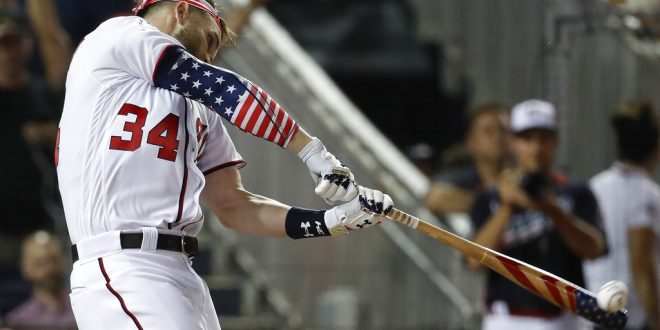 Last night, Bryce Harper of the Washington Nationals gave a thrill at the Home Run Derby in Washington, D.C.

Harper hit a total of 45 home runs, winning the trophy in his home field. In an interview before the Home Run Derby, Bryce Harper stated, “I’m looking forward to tonight and tomorrow and to really take it all in with our fans and my family. And just really excited it’s in the nations capital.”

Harper gave fans one last memory to thank them for their support through the years, along with a reduction in ticket prices down to $1. Harper has not been playing under normal expectations this season with a hitting average of .214. In 2017, Harper had an average of .319. Harper is hoping that the All-Star break will help him regain his strength for the rest of his time in Washington. He is set to become a free-agent following this season.

The MLB All-Star week continues with the 89th All-Star Game starting at 8:00 p.m. at Nationals Park. Florida will be represented by Tampa Bay Ray’s catcher Wilson Ramos and Miami’s JT Realmuto. Unfortunately, Ramos sustained a hamstring injury during a game on Saturday against the Minnesota Twins. Ramos will not be able to play in the game, but still plans on attending to participate in the events taking place.

JT Realmuto of the Miami Marlins will be appearing in his very first All-Star game. This opportunity has been a long-term dream of Realmuto’s and he is looking forward to cherishing every moment of it.

.@Marlins Catcher J.T. Realmuto talks about being a part of the NL All-Star team and being an expecting father. #JuntosMiami pic.twitter.com/q03SmQvvc5

Tune in later tonight for live coverage on the All-Star game starting at 7:00 p.m.