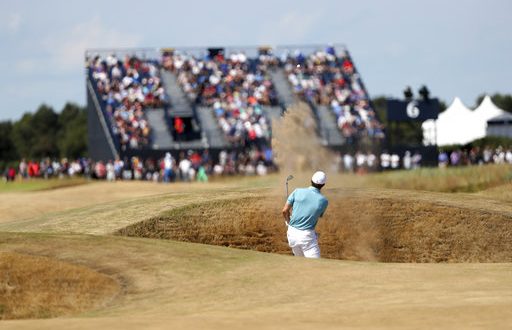 Jordan Spieth of the US plays out of a bunker on the 6th hole during the first round of the British Open Golf Championship in Carnoustie, Scotland, Thursday July 19, 2018. (AP Photo/Peter Morrison)

Kevin Kisner didn’t have the best second round of The Open. After a fantastic first day at -5, Kisner was only -1 in day two. He was a solid three under in the round going into the final hole when a double bogey brought him down to -6 overall. Still, Kisner must be happy with being tied with Johnson at -6

Zach Johnson, on the other hand, had himself a fantastic round two. After a bogey on the first hole, Johnson went on to record birdies on holes 3,4,6,14 and 18. A -4 round two was good enough to leave him as the Clubhouse leader after two days.

Zach Johnson is the clubhouse leader. Birdie on 18 sees him finish with a 67 and -6 at the halfway stage.

Tommy Fleetwood and Xander Schauffele had the two best scores in round two. Fleetwood was a spectacular -6 on the day after a lackluster first round. Fleetwood had 6 birdies and 12 pars on the day to put move up 47 spots on the leaderboard and leave him tied for third place. Schauffele entered day two even and finished the second round at -5. He recorded 4 birdies, 1 bogey and an eagle on hole 14. Schauffele is also tied for third after his round two performance.

After a nightmare finish to round one, Jordan Spieth responded with a great round two performance. Round one saw Spieth record a double bogey on the 15th hole and bogeys on holes 16 and 18 to finish the day at +1. Day two was a different story. The defending Open champion displayed his resiliency, going 4 strokes under on the day to put him tied for 10th place at -3. After calling his day one performance a “brain fart,” Spieth looked locked in today and put himself back in Open contention.

Tiger Woods has had a rocky performance thus far at The Open Championship. For every step forward he took, he took one step back. Woods, currently sitting at even through two rounds, started off round one hot with 2 birdies in the first 4 holes. Woods then dropped from -2 to even with bogeys on the 13th and 15th holes. In round two, Woods started with two bogeys followed by 2 birdies. He would have two more bogeys and two more birdies in the round. Tiger is tied for 29th on the leaderboard as it stands.

Woods said that he got off to “not a great start” in round two and explained how the weather impacted his play.