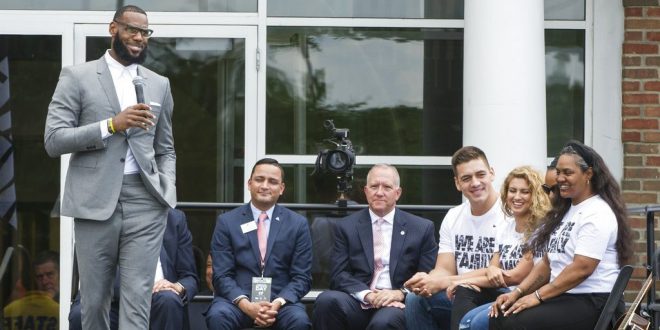 LeBron James has had an eventful past few weeks with his recent signing to the Los Angeles Lakers, along with the opening of his new I Promise School.

In Akron, Ohio, the first day of school has kicked off for students attending James’ I Promise School. The school currently has an enrollment of 240 students between the third and fourth grade. But how does this school differ from others? The I Promise School is a school made by the collaboration of LeBron James Family Foundation’s executive director Michelle Campbell and James himself. They proposed the idea to provide a better life for students that underperformed. Not only did they hope to help students, but they aimed to create a better life for struggling families.

The jitters before the first day of school are real right now!!! Tomorrow is going to be one of the greatest moments (if not the greatest) of my life when we open the #IPROMISE School. This skinny kid from Akron who missed 83 days of school in the 4th grade had big dreams… https://t.co/PwmRaHRfng

In the year of 2011, the I Promise program was established. By 2018, they partnered with Akron Public Schools to create the I Promise School. In 2020, they hope to expand with grades starting from kindergarten to the eighth grade.

This program offers much more than the average public school. Not only with providing the students with the resources they need, but also by giving families the support they need to guarantee that their children will succeed. Some of these resources include GED classes for adults, a food pantry, and social and emotional guidance for the students. The overall goal of this school is to change of the lives of these families and students. James states, “this is a huge amount not only in my life, not only in my family life’s, not only in the foundations life, but for these kids and for the whole city of Akron, more importantly. This is a huge moment for all of us.”

This is an exciting time for James as he has also recently signed with the Los Angeles Lakers. While there was much speculation that James had quickly made the decision to leave the Cavaliers and head out to Los Angeles, he has stated that it was a choice that had been on his mind for a long time. To James, the Lakers are a historic franchise and he hopes to help return them back to the championship franchise they are.

It’s bittersweet timing for James as he wants to be at the I Promise School on a day-to-day basis, but is currently moving to Los Angeles.