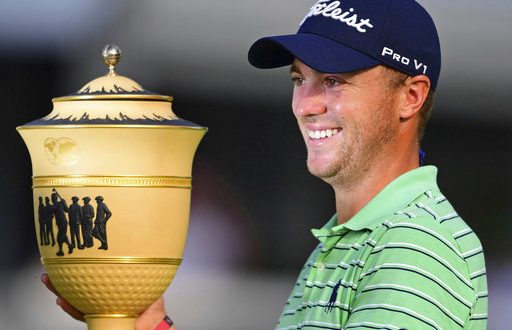 The WGC-Bridgestone Invitational in Akron, Ohio, finished up Sunday. Let’s look at a few storylines from the event.

After Justin Thomas missed the cut at the Open Championship two weeks ago, he bounced back in a big way at the WGC.

He shot a 1-under in the final round Sunday. All he needed to do was stay ahead as he finished round three with a comfortable lead. Thomas finished four strokes better than second-place and fellow American Kyle Stanley.

He cited his patience and lack of panic for his mastery of the course.

Now, Thomas will be paired with Rory McIlroy and Tiger Woods at next week’s PGA Championship.

American golf has seen a rise in the last year or so, and the WGC-Bridgestone was no different. Of the top nine finishers, six of them were American. The Open Championship had a plethora of Americans, as did the tournaments before it.

Some of the names at the top of the Bridgestone included Thomas, Stanley, Dustin Johnson, Brooks Koepka, Aaron Wise and Patrick Kantlay.

If you look through the top 50 or so on the leaderboard, golfers from the U.S. sit all over it.

Tiger Woods opened up the tournament with two solid rounds, but he faltered down the stretch. After shooting a 6-under through the first two rounds, he followed it up with consecutive 3-over rounds.

When Woods struggles, his putting game is a usual culprit, and the Bridgestone was the same old story.

Will Woods ever win another tournament? That’s the question that seems to be at the forefront of everyone’s mind, as he hasn’t won a tournament since 2013 nor a major since 2008.

The next tournament on the tour is the PGA Championship where Jordan Spieth looks to become the sixth golfer ever to win a career Grand Slam – winning all four majors at any time in his career.

Chris O'Brien is a rising sophomore at the University of Florida. He aspires to be an on-air sports anchor someday.
Previous UF Position Preview: Defensive Backs
Next Pro Football Hall of Fame Welcomes Class of 2018 This Weekend