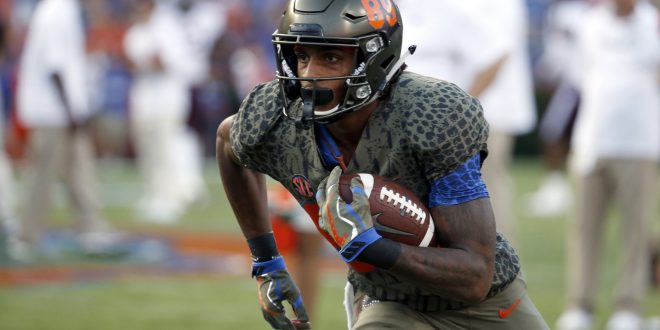 The Florida Gators‘ offense last season dealt with numerous suspensions and injuries to key players. As a result, the football team finished 4-7 overall and won just three games in the Southeastern Conference.

While the program cleared out all of the coaches from the previous regime, there are still people to look out for from last year’s team. Tyrie Cleveland, who lead the team in receiving yards in 2017-2018, is one player who can be a significant contributor for the Gators this season.

Cleveland spoke to reporters during UF Media Day and last Saturday after practice. Here are some highlights of what the junior standout had to say about the team and his personal development:

Similar to the issues he faced in his freshman season, Cleveland dealt with another hamstring injury over the spring. The former four-star wideout missed the team’s first scrimmage in March, but he did participate in Florida’s Orange and Blue Spring Game on Apr. 14.

Cleveland said that despite missing time during spring practice, he was still productive while nursing his injury. With the addition of wide receivers coach Billy Gonzales, Cleveland was also able learn more about himself as a player and the mistakes he has made in the past.

After the second fall practice wrapped up, Cleveland spoke to reporters about the status of his hamstrings. He also listed a few of things that he done over the summer to get his body in shape.

With the addition of transfers Trevon Grimes and Van Jefferson, the Gator’s receiving corps figures to be one of the best in the SEC this season. Although the team has a lot of talent on the perimeter, a few receivers believe the group is being overlooked.

Cleveland is one of those players who feels like Florida’s wideouts are not being shown as much appreciation as they deserve. Cleveland is impressed with the physical attributes of his teammates, which he thinks can lead to elevated production.

Florida kicks off their season against Charleston Southern in just over three weeks, but Mullen still has not named a starting quarterback. The three players dueling it out for the starting job are Emory Jones, Feleipe Franks and Kyle Trask.

Cleveland is in the mindset that the competition has helped to develop all three of the quarterbacks. In Cleveland’s eyes, this will contribute to the Gators’ offense improving in the 2018-2019 campaign.

Whoever starts on Sept. 1 should not be a problem for Cleveland because of his chemistry with each quarterback. Over the summer, Cleveland worked with Jones, Franks and Trask several times a week to get on the same page with all of them.