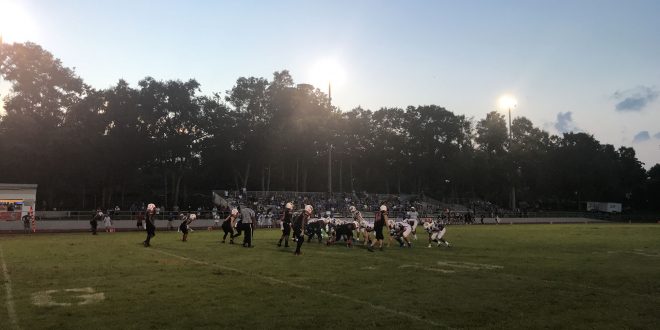 If Friday night’s game was any indication of the Santa Fe football season, then it looks like it could be a good year for the Raiders. They beat their rivals, the Newberry Panthers, 31-13 in their season opener. The game was nothing short of intense.

With just 8:57 left in the first quarter, Newberry had the ball, but they didn’t get far with it. Santa Fe’s Deonte Graham picked the ball off of the quarterback for a huge interception at the start of the game. The Raiders only had the ball in their possession for a one play, but managed to make it happen. Raider’s quarterback Deron Reid with an 80-yard touchdown run to put Santa Fe on the board.

Santa Fe wasted no time getting the ball back. On the next kick return, the Raiders snatched the ball from Newberry, giving Santa Fe another possession and another chance to score. Again, Reid was to thank for the next touchdown as he made it into the end zone for Santa Fe on third and goal. Raiders up 13-0.

However, the Panthers weren’t going down without a fight. In the second quarter, Newberry’s running back Kobe Delima ran 25 yards to finally get the Panthers on the board. Raiders still ahead 13-7.

The Raiders took complete control of the game in the third quarter. In the beginning of the third, Reid threw down field to receiver Jarvis Decoursey for 52-yard touchdown pass. Raiders up 19-7 with 7:41 to go in the third. Just minutes before the end of the quarter, Reid with yet another touchdown run to put the Raiders up 25-7.

The Newberry Panthers only scored once more in the game, only to be met with another Santa Fe touchdown at the end of the fourth.

Santa Fe Head Coach Dock Pollard said he liked a lot of things he saw on the field Friday night. With a quarterback like Reid at the helm of their ship, it could fair up to be a really good season for them.

Check out the whole interview with Coach Pollard here:

The Raiders are trying to come back from last year’s season where they only won one game.  They will take on the Gainesville Hurricanes next week at Citizen’s Field.

Courtney Mims is a junior telecommunications major at the University of Florida. She enjoys covering all Gator sports and drinking gallons of Starbucks coffee while doing so.
Previous Tampa Bay Hosts Detroit in Third Game of Preseason
Next Buchholz Takes Season Opener Over Rival Eastside 38-27