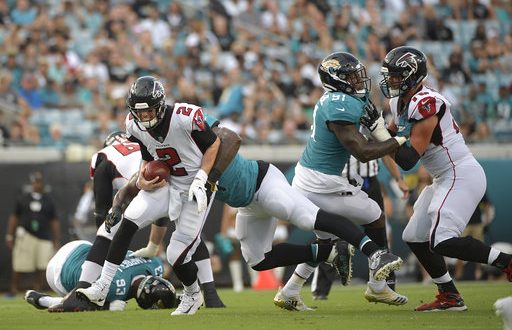 Week 4 of NFL Preseason: Who Will Win a Starter Spot on these Florida Teams?

The NFL’s preseason is coming to an end. Teams are taking the final week to determine who fills the final roster spots with opening night around the corner.

Here are the key match-ups to watch on Thursday:

Both teams have spots that need filling in order to bolster depth. Wide receiver Jaydon Mickens will look to catch Doug Marrone’s eye for the final wide receiver spot that was opened up by Marqise Lee’s injury. He’ll likely be competing with Rashad Greene, Sr. and Shane Wynn.

Spots at linebacker and running back are up for grabs on the Bucs’ squad.

Rookie Shaun Wilson is in a two-man race with second-year player Dare Ogunbowale for the final roster spot. Both have impressed in their own right, Wilson in the return game and Ogunbowale as a receiver out of the backfield.

With the talent on our squad right now and the factors our team needs addressed, there are some tough decisions ahead for Licht and company when they decide on the 53-man roster.#GoBucshttps://t.co/h7FHhNsJkF

Meanwhile, at linebacker, there is a five-man race for the last two or three roster holes in that position. Adarius Taylor has filled in at the starter role for outside linebacker with Kendell Beckwith sidelined as he recovers from an ankle injury.

The men in the hunt for the backup positions include sixth-round pick from Wisconsin Jack Cichy and former undrafted free agent Cameron Lynch.

A rematch of the 2017 regular season matchup that ended in a 20-17 win for the Dolphins. This matchup won’t feature most of those who participated in that game.

“It’s a good time to kind to just chill out a little bit and just think about the preseason, think about everything you’ve learned,” Dolphins safety Reshad Jones.

However, Jones is unlikely to play Thursday night, but Head Coach Adam Gase said some starters could end up seeing some playing time.

Headlines from around the web: https://t.co/q8IqwZt8e8

The Falcons have a full-on battle at fullback taking place between Ricky Ortiz and Jalston Fowler. Falcons Head Coach Dan Quinn said the fullback will play 20 to 25 percent of the snaps on the offense. He also said special teams value will factor heavily into the decision.

Former Georgia wide receiver Reggie Davis will look to snag a roster spot as he is in a three-way battle with Devin Gray and Dontez Byrd.