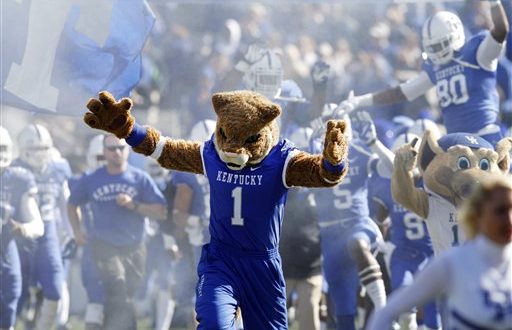 The long-awaited return of college football has finally come to an end with it kicking off around the country starting tonight. But for most teams, the season begins on Saturday. For the Kentucky Wildcats, they’ll be taking on the Central Michigan Chippewas in their season opener at home.

After starting their season on the road last season, Kentucky Head Coach Mark Stoops is happy to be able to host their first game this year. Kroger Field will be welcoming Central Michigan who is coming off an 8-5 season, with a 6-2 record in the Mid-American Conference.

Stoops says, right now, the team is putting the finishing touches on the week and continuing to work to prepare for this weekend. They’re just excited to get back to playing games and hopeful for what the season will bring.

Something the Wildcats did not try to shy away from throughout training camp was physicality. Stoops says his team did all it could when it comes to being aggressive and physical. And because of this, he’s happy with the state of each player’s health heading into the season.

For the last four seasons, there haven’t been many questions with Kentucky’s kicking game. Austin MacGinness held down the position throughout that time. But now, Stoops and his coaching staff have several options for the position.

The team will be traveling with four kickers, which Stoops says is unfamiliar territory for him.

One option he has is to go with former walk-on Miles Butler. Stoops has seen consistency out of him but doesn’t feel he has as strong of a leg as freshman Chance Poore.

Stoops plans to use Poore in situations where the team needs a long field goal at the end of a game. He’ll do this with the help of the new rule allowing players to appear in four games and still redshirt.

Max Duffy is set to start as  Kentucky’s punter, and Grant McKinnis will do the kickoffs.

With so many options, the Wildcats have the luxury of flexibility at the kicking and punting positions and will figure out what’s best for the team as the season progresses.

Kickoff for Kentucky’s game versus Central Michigan is Saturday at 3:30 pm on ESPNU in Lexington.