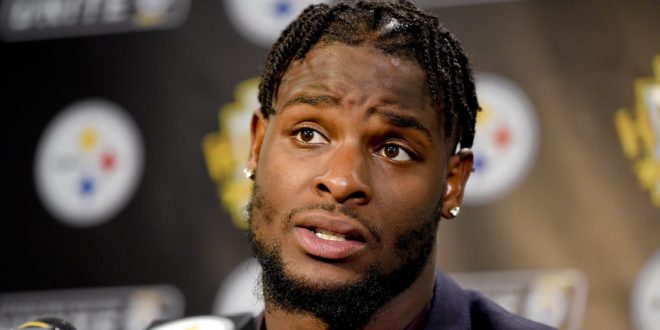 FILE - In this Oct. 22, 2017, file photo, Pittsburgh Steelers running back Le'Veon Bell (26) answers questions at a post-game meeting with reporters following a 29-14 win over the Cincinnati Bengals in an NFL football game in Pittsburgh. The Steelers are beginning preparations for their Week 1 opener against Cleveland without All-Pro running back Le'Veon Bell. Bell did not arrive at the team's facility in time for practice on Monday and has yet to sign his one-year franchise tender, leaving his status for Sunday's visit to the Browns in doubt. (AP Photo/Fred Vuich, File)

With Bell Still Holding Out, It’s Business As Usual For Steelers

Pittsburgh Steelers RB Le’Veon Bell has a history of holding out.

He held out last year, reporting to the team just nine days before the regular season started.

And this year, he’s adding a little more suspense.

As of Tuesday, Bell still has yet to report to the team with the Steelers’ first game against Cleveland just five days away.

Many would assume this to be quite the distraction for a franchise, but the Steelers don’t seem too worried about something they can’t control.

Bell holdout not a distraction, according to the team

The media in Pittsburgh interviewed several players earlier this week, and many reporters had the same question: Is Bell’s holdout a distraction?

The consensus was pretty clear from the players: No, it isn’t.

Steelers offensive lineman Maurkice Pouncey was the first to say it’s not an issue for the team going into week one.

Pouncey told the media Bell’s absence doesn’t matter at this point, because as a team they’re too focused on the task at hand in Cleveland this weekend.

Steelers defensive lineman Cameron Heyward shared some of the same thoughts with the media. “I’m going to be disappointed, but obviously, I would love to have him here. My focus is on this team and who is here. When Le’Veon gets here, he gets here. But until then, let’s ride.”

Coach Tomlin is confident with James Conner in Bell’s absence

Mike Tomlin echoed the words of his players on Monday when discussing the Le’Veon Bell situation.

The question now is, who will carry the load for the Steelers on Sunday if Bell continues his holdout?

RB James Conner did enough to impress the team over the preseason to the point where they feel comfortable handing him the reins going into week one.

Conner ran for 100 yards on 19 carries in the preseason, including seven catches for 61 yards.

The 23-year-old product from Erie, Pennsylvania actually played his college home games at Heinz Field with the Pittsburgh Panthers, and he’s continued to garner confidence from his teammates and coaching staff.

Guard Ramon Foster has belief in him as a player.